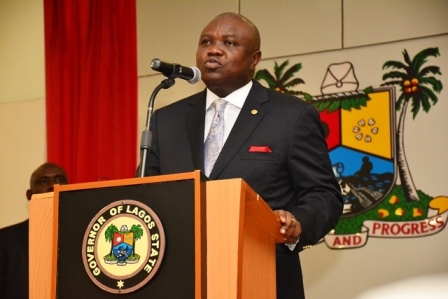 Governor Akinwunmi Ambode of Lagos State, Friday, read the riot act to commercial motorcycle operators popularly called Okada riders, commercial buses and street hawkers, saying that the state government will no longer tolerate their nefarious activities on the streets and highways which has caused untold hardship for the people of the state in recent times.

Addressing Government House Correspondents shortly after an emergency Security Council Meeting which he chaired, Governor Ambode said that it had become evident that traffic crimes and robbery are mostly as a result of the menace of Okada riders and street hawkers, while recalcitrant commercial buses have become lawless and reckless on the road.

He said the Council made far reaching decisions at the meeting in line with the commitment of his administration to ensure security of lives and property as well as the enforcing of the Rule of Law.

The Governor said that the government will not allow a few notorious elements to cause a breakdown in law and order and upset the peace that the state has enjoyed over the years.

To this end, he said he has directed the full enforcement of the Lagos Road Traffic Laws, especially as it concerns the restriction of okada and tricycle operations.

The Governor therefore said, “Any person who fails to comply with any of the provisions of this Section commits an offence and shall be liable on conviction as stipulated in the law.

“Henceforth, all commercial vehicles, except Bus Rapid Transport buses, must use only the service lanes in accordance with existing traffic laws. All conductors of Commercial buses must sit down in their buses and keep the doors closed at all times while in motion. It is against the Law for conductors to hang on the bus doors and leave the doors open. Any bus contravention will be met with severe punitive measures.

“Commercial buses can only drop and pick passengers at officially designated bus stops henceforth. Any illegal and indiscriminate picking and dropping of passengers is against the law.

“Other road users who break traffic laws will pay a compulsory traffic fine in accordance with the law. Mobile Traffic courts are being introduced to prosecute offenders promptly”.

Governor Ambode also took time to speak on the traffic situation in Apapa axis of the state, attributed the gridlock to the situation of tank farms and daily activities of petrol tankers in the area.

He expressed concerns that more tank farms are in the process of being approved, revealing that Lagos alone accounts for 80 percent of the cargo that comes into the country through the ports while about 90 percent of the fuel used across Nigeria is loaded in Lagos.

He also frowned at the fact that three months after meeting with tank farm and petrol tanker owners, they have been unable to come up with a solution to the gridlock caused by the tankers queuing up on roads and bridges to load petroleum products.

He however said that the state of affairs that has accentuated traffic gridlock in Apapa area and its environs is no longer tolerable to the State Government saying that necessary arrangements have been made with the relevant Regulatory Institutions to sanction defaulting port users – importers, tank farm owners, terminal operators and shipping companies.

On the backdrop of this, Governor Ambode said the Security Council decided that all tank farms be given a 90-day grace period to build loading bays for their tank farms, with a caveat that any tank farm that fails to provide a loading bay after the grace period, would be shut down by the state government.

“In addition, tank farms owners must desist from allocating pick-up papers to trucks beyond and above their daily capacity as is the case presently,” he said.

Governor Ambode also admonished residents of the state to see the last two months of the year as a period that calls for vigilance and a changed attitude towards issues relating to crime and terrorism.

He urged residents to cooperate with the government at all times, just as he warned them against the dangers of patronizing street hawkers.

“The next hawker could be a robber or terrorist. You are now well-advised. If we all cooperate and decide not to buy, gradually and collectively, the hawkers will not come to the highways and streets anymore. Our roads will definitely become safer”.

“Our security agencies have been directed to increase their presence on the roads and highways to ensure greater safety. Once again, I am committed to a safer, cleaner and more prosperous Lagos; a Lagos that works for all”, he said.

On his part, Commissioner of Police, Fatai Owoseni also assured that the Police will increase their presence across major areas of the state as well as ensure the total enforcement of the laws of the land.

Various stakeholders of transport associations who were also present at the briefing took turns to pledge their support and stressed the need for their members to comply with the directive to ensure free flow of traffic and sanity on the roads.