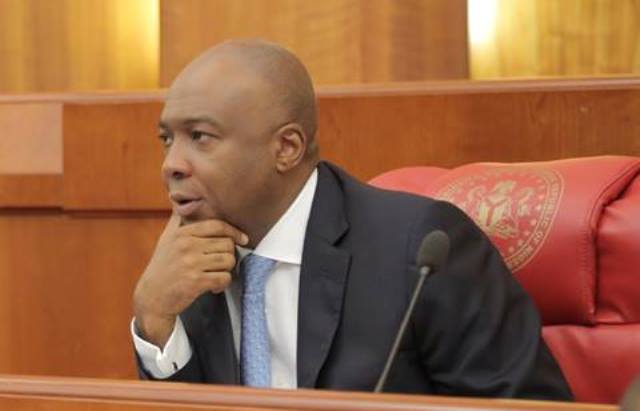 The Senate may soon begin to reel into another session of rancour, this time around, over the Composition of its standing Committees, as core opponents in the Senate, Senator Kabiru Marafa and Senator Sulaiman Hunkuyi controverted the selection process which they said did not follow due process.

The Process began shortly after the Plenary of the day kicked off when Senator Marafa raised a point of order, alluding to Sections 62 (2), 60 of the Nigerian constitution and order 97 and 197 of the Senate Rules, contending that the leadership of the Senate erred in the process of constituting the Committees.

Marafa said the Senate leadership had perpetrated illegality by increasing the number of Senate Committees from 57 to 65, contrary to the Rules of the Senate and the provision of the Nigerian constitution.

He said besides, the Senate leadership Select Committee saddled with the task of constituting the Committees was illegally constituted and in contravention of section 62 of the House Rules.

He said the constitution of the Select Committee of the Senate also amounted to a willful disregard for Order 100 and Order 1 of the Senate’s Rule on the basis that the Senate did not approve the Committee before select committee release them.

Marafa also alleged that even the Senate Committee’s so far constituted were defective because they flouted order 3 Rule 2 of the Senate Standing Rule on Ranking.

He said the Committees did not reflect the seniority, noting that some Committees as constituted is headed by non-ranking members, while their senior colleagues were made deputies or ordinary members.

He noted also that the principle of balancing was not also followed in constituting the committees as some states got more than one chairmanship committees, while others got none.

He, however, said the Senate President, Bukola Saraki owes Nigerian some appologies for flouting the Constitution and the Senate rules in constituting the Committees.

He said Nigerians reserved the right to charge Saraki for contempt in the event of his failure to reconstitute the Committees to reflect the rule of law.

The Senate President while responding told the aggrieved Senator that he had noted his observation, just as he called on the Select Committee headed by Senator Ibn Na’Allah to also take note.

As the disquiet over the Senate Committee Composition was calming down, another Senator, Kunkuyi from Kaduna also raised a point of order to corroborate the position earlier canvassed by Senator Marafa.

He said it was wrong for the Senate President to have referred the protest by Marafa to the Select Committee, which integrity he said has remained in doubt.

Saraki, however, interjected him, calling the attention of Senator Hunkuyi to Section 64 of the Senate Rule which states that decision on Committees is the prerogative of the leadership and the Committee of the whole of the Senate and not that of any individual.

Against this background, Saraki ruled the Senator out of Order.

Addressing the media after the plenary, Senator Marafa said it amounted to legislative tyranny for the Senate leadership to constitute the Senate Committees without recoursing to the plenary for approval.

He said, “Everything we do in this senate has been forged, alluding to the alleged forgery of the Senate Rules which paved the way for election of Saraki as the Senate President.

Related Topics:Rumblings in Senate as Senators kick against Saraki’s 65 committees
Up Next