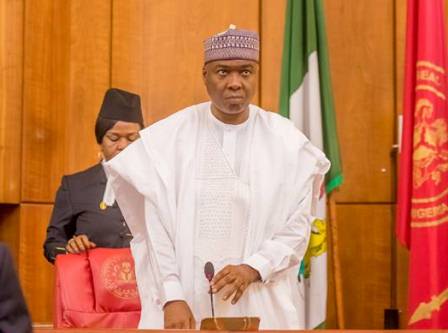 Dr. Abubakar Bukola Saraki, Nigeria’s Senate President, has called on commercial banks operating in the country to partner with the Federal Government to effectively tackle corruption in the system.

Saraki who spoke when the management of Fidelity Bank Plc, led by its Managing Director and Chief Executive Officer, Mr. Nnamdi Okonkwo, visited him at the National Assembly, said the banks are at a vantage position to disclose suspicious transactions to the relevant authorities.

The Senate President, according to a statement by his Media Office in Abuja, stated that the banks have a major role to play in stamping out corruption from all aspects of the economy.

Saraki said: “I think also that the area that is key is the fight against corruption. The banks must play a role in knowing your customers, not only in knowing your customers but also being accountable for the activities of your customers because in developed societies, banks know that if their customers are being questioned in any activity, they too are responsible for either not bringing it to the attention of the government because there is nothing that happens that does not go through the banking system.

“But I think when the banks turn a blind eye saying it is not our business, that does not help. I think we need to start looking at that in supporting the government in addressing this area.”

He further urged banks to ensure that they lend needed support to farmers in order to boost food production and stimulate the growth of agriculture in the country.

Earlier, Okonkwo thanked the Senate President for receiving his team despite his busy schedule, saying that the visit was in line with the bank’s ongoing engagement with critical stakeholders in the economy.

He added that Fidelity Bank has been and would continue to provide support for Small and Medium Scale Enterprises (SMEs), industries and telecommunication sectors in order to grow the economy.

Related Topics:Saraki urges banks to support fight against corruption
Up Next