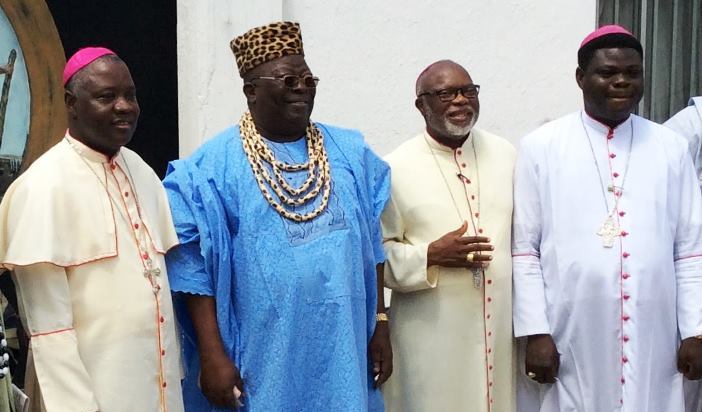 As the efforts by the Catholic Bishops from Taraba and Benue to broker peace between the two states which have hitherto not known peace for some time gathered momentum, JUSTIN TYOPUUSU, write on the initiative of the religious leaders in restoring peace in the two states.

The persistent border crisis between Taraba and Benue states and some internal crisis in the two states may soon be over if efforts by the Catholic Bishops of the two states in bringing about lasting peace is anything to go by.

The peace initiative which was conceived by a small group of young men under the auspices of “Concerned Taraba Tiv Youth Frontier” and supported by Rev. Fathers and Pastors from Taraba state, got a boost with the intervention of the Catholic Bishop of Jalingo, The Most Rev. Charles Hammawa and his counterpart in Gboko, Most Rev. William Amove Avenya.

Taraba and Benue states have recorded series of crises at one time or the other and presently Taraba is faced with serious security concerns despite efforts by the state governor, Darius Ishaku to restore peace in the state.

There are reported cases of killings here and there in the state and few days ago, the celebration of the tribunal victory of Aisha Alhassan of the APC as governor led to the killing of many, while many were injured and houses burnt in Wukari town.

Thousands of people from Taraba are currently taking refuge in Benue and Nasarawa state following communal crisis that engulfed the central and southern parts of the state in the last two years.

There is nothing spectacular about news of peace meetings particularly between the states because series of such meeting have been held in the past without corresponding peace thereafter.

Overwhelmed by the visit of the men of God to his Palace in Gboko, The Tor-Tiv, His Royal Majesty, Orchiviligh Alfred Akawe Torkula (Tor-Tiv Vi) remarked that “I have no doubt in my mind that God is about to do something historic between Tiv and Jukun. With your involvement, there is light at the end of the tunnel and we shall see permanent peace between Tiv and Jukun.”

The Tor-Tiv recalled that the Tiv people have lived under the authority of the Aku Uka from the pre-colonial period to date. Their relationship with the Jukun were so cordial that when the British officials on expedition in Nigeria sought for boundaries between Jukun and Tiv their informant, a Jukun man merely inserted his ten fingers together, demonstrating that they lived together as one people.

He noted that the relationship turn sour when Gongola state was created out of Benue Plateau State as a result of fear of domination and the fight for scarce resources, which cause the two neighbours to fight.

“For some time now, many wars have been fought between the two tribes, too many lives and property destroyed. Today, there is suspicion and fear of domination in their relationship to the extent that Tiv people are being denied some rights in the state,” elder Beeve Tyogema disclosed.

But the Bishops are determined to correct these misconceptions and unite the people for peaceful coexistence. They have earlier in July this year met with the Aku Uka in his palace who assured them of his readiness to make peace.

The Aku Uka told the Bishops during the visit that the problem between Jukun and Tiv was long over and the two groups were not anticipating any crisis between them again, but was quick to blamed religious, traditional leaders and the elite for being responsible for the problems of the country because they were not saying the truth.

In all the visits, the bishops carried with them a message of peace. Spokesmen of the bishops on the visits, Archbishop Ignatius Ayau Kaigama, himself a Jukun man and Most Rev. William Amove Avenya a Tiv man told the traditional rulers that they were concerned about peace between the two tribes who once live in peace in the past.

“We are concerned about peace between Tiv and Jukun. We have been praying for peace, but we must do more to ensure permanent peace between the two tribes. In doing this you the paramount traditional rulers of the two tribes have a key role to play in ensuring intra and inter-ethnic harmony.

“In doing this, we must look inward on issues that generate tension and crisis and deal with them. We want to promote peace and we cannot achieve that without your support and cooperation,” the bishops told the paramount traditional rulers during their visits to them.

Considering the importance of the institution of the Aku Uka which is a revered position among the Jukun, seeing as a god in human body, and that of the Tor-Tiv respected by the Tiv people all over the world, their genuine involvement and commitment to peace initiative of the bishops would definitely bring permanent peace between the two tribes.

Before the collapse of the famous Kwararafa empire, the Aku Uka was the supreme ruler of Kwarrarafa, a Kingdom governed by the Jukun which stretched in the West African sub region. He is held in such awe by his people and is respected by all.

It is unfortunate that series of communal crisis not only between the two tribes alone, but other forms of crisis in recent times have threatened the authority of this revered institution of the Aku Uka. These crisis have left the ancient towns of  Wukari and Ibi deserted.  Takum, the home town of Gen. TY Danjuma (rtd) have been pulled down and remains without an Ukwe, the paramount ruler of the town for years.

Farmers in Gassol, Bali, Donga and Gashaka cannot boast of any meaningful harvests because of crisis between herders and farmers, which has forced thousands to flee their homes and abandoned their farms.

The religious leaders have beacon on the Aku Uka of Wukari and The Tor-Tiv, who have all concurred and nodded in affirmation that peace is the only solution to development. The Lion of the Tiv (The Tor-Tiv) and the Crocodile of Wukari (The Aku Uka) have agreed to come down from their comfort zones for a historic peace meeting with the men of God.

For the people of Taraba and Benue, a new chapter in the annals of the history of the two tribes is about to be opened and they can’t help, but wait to see the ‘historic peace meeting’ come soon.

Related Topics:Taraba/Benue crisis: Catholic Bishops to the rescue
Up Next