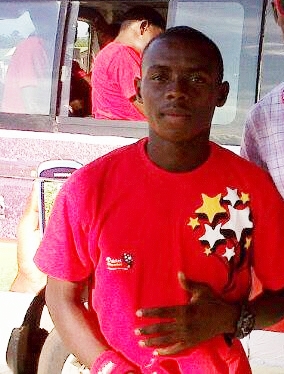 Airtel Rising Stars (ARS) football tournament has achieved another record in its history for producing Sunday Alimi, one of the players in the Eaglets squad that won the recently concluded U-17 World Cup in Chile.

Sunday Alimi during the ARS Season 3

The 16 year-old forward featured in several matches of the tournament and also played in the final match against Mali when he came on in the second half.

Alimi, a product of Airtel’s U-17 grass root football initiative which recorded its fifth season in 2015, came into limelight when he made his debut for the Golden Eaglets and scored a crucial goal that saved the day for his side during an international friendly against Egypt in Kaduna last year.

Alimi was discovered in the Season 3 of the ARS tournament where he emerged one of the best players of the tournament and his outstanding performance caught the attention of the national team coaches.

Speaking after the U-17 tournament in Chile, Alimi said: “I remain grateful to Airtel Nigeria for the opportunity given me to showcase my talent through the ARS competition. ARS helped me to develop and become what I am today. It gave me exposure and determination to aim for the national team. I am very proud of Airtel.”

His Coach and Manager, Mr. Idris Bolarinwa, who registered Alimi for the ARS competition, recalled that the player was a very young boy when he featured in the 2013 ARS tournament but was quickly identified because of his skills and technical ability.

Bolarinwa said, “The exposure Alimi got through the Airtel Rising Stars Football tournament made him what he is today. Alimi is ever grateful to Airtel Rising Stars. When he returned from the World Cup in Chile, he came to me and showed me the medal and said, ‘Coach, see I am a Rising Star.’ He did the same thing when he won a medal during the ARS 3. For him to be saying he is a ‘rising star’ means that he appreciates what Airtel Rising Stars platform did for his career.”

According Mr. Bolarinwa, Alimi participated in several competitions before moving to the national team, but ARS football tournament gave him the much needed breakthrough. “He will ever be thankful to Airtel Nigeria for the programme,” Idris added.

Related Topics:Airtel records another success with Eaglets playerAlimi
Up Next