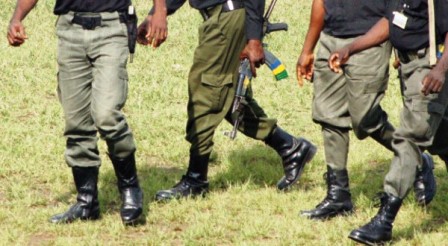 The Nigeria Police Force has recorded another success as its detectives attached to the Borno state command have arrested one of the suspected commanders of the insurgents Muhammed Usman.

The Assistant Inspector General [AIG] of police zone 12 which comprises of Bauchi, Borno and Yobe states Mr Tunde Johnson Ogunsakin disclosed this in a press release issued to journalists in Bauchi.

According to him, the suspect who is the serial number 40 on the Boko Haram wanted list was nabbed at ‘Abujan Talakawa’ area in Maiduri, Borno state capital during ‘intensive cordon and search operations by the police.

“The suspect was arrested on the 15/11/2015 and handed over to the Headquarters of 7 Division of the Nigerian Army for further investigation while efforts are being intensified to track down and apprehend other suspects still at large.” The statement reads.

Ogunsakin who ascribed the success recorded by the police detectives to arrest the suspected Boko Haram leader to the useful information provided to them by the members of the public appealed for more cooperation from the people to security operatives in order to enable them discharge their duties of protecting lives and property of the citizens.

Meanwhile, the Bauchi state police command has alerted the people of the state of the plan to carry out coordinated attacks by some men and women numbering about six using improvised explosives devices [IEDs] in parts of the state especially venue of religious activities and second hand clothes market which opens mostly on Fridays.

Related Topics:Police arrests another wanted Boko Haram kingpin in Maiduguri
Up Next