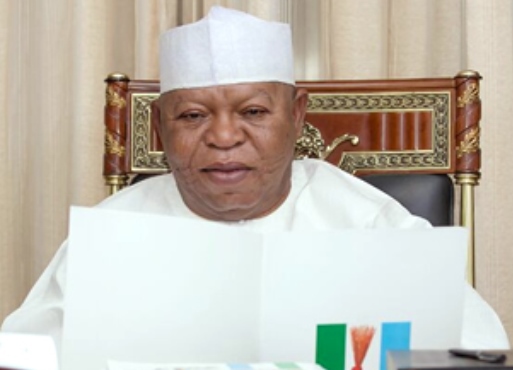 Following the sudden death of Prince Abubakar Audu, governorship candidate of the All Progressives Congress (APC) in Kogi State, a family member of the deceased said his uncle was poisoned.

It would be recalled that the news of Prince Audu’s death broke shortly after the Independent National Electoral Committee (INEC) declared that the November 21 governorship election was declared inconclusive.

Report obtained from thetrentonline quoted the family member of late Prince Audu saying he suspected foul play in the death of his uncle who is seeking re-election to the Kogi State government House.

According to close family sources, who spoke on the condition of anonymity, said Prince Audu complained of stomach cramps before going to bed on Saturday night. “He suffered a stroke on Sunday morning at about 9am”, the source added.

“My uncle was poisoned, he was poisoned,” the source told our reporter in between tears. “He shared a meal with a top APC chieftain from the South West (name withheld) a few days ago. Since then, he has not been himself. His death is planned. It is all about usurping his position.”

In the same vein, an inside source in the Audu’s Campaign Organisation, claimed that the late Audu suffered another stroke, shortly after the INEC’s declaration the result of the election was inconclusive.

Our source, who didn’t wish to be named, said that Audu died of a massive heart attack soon after.

He is survived by wives and children.

He is scheduled to be buried according to Islamic rites at 10am on Monday.

Related Topics:Audu’s death: My uncle was poisonedfamily member reveals
Up Next