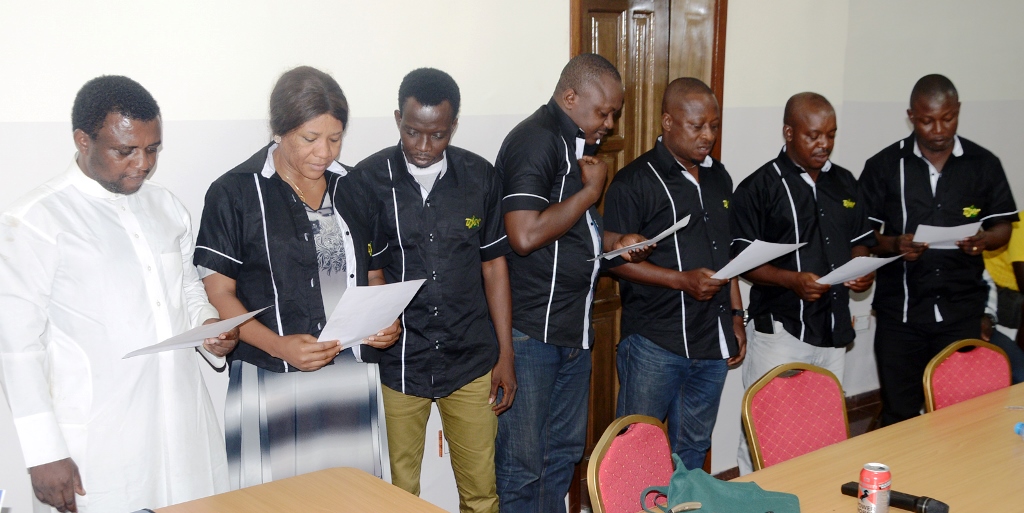 The Brand Journalists Association of Nigeria (BJAN) has re-elected Goddie Ofose, as the chairman of the association for the second term in office owing to the expression of satisfaction with his first term performance.

A cross session of the newly elected executive members of Brand Journalists Association of Nigeria (BJAN) and members of the electoral committee of the association with the representative of Mr. Deji Elumoye, Chairman, Nigeria Union of Journalists (NUJ) Lagos State chapter, Mr Ben Ibe (middle) after the election in Ibadan on Saturday

Ofose emerged as his rival, Mr. Azubuike Nadoze, withdrew from the race minutes to the presentation of manifesto by the contestants.

In his acceptance speech after the swearing-in, in Ibadan, Ofose, assured members of the association that he will fulfil his campaign promises. He also pledged to use his second term to make BJAN a household name among the corporate bodies and consolidate on his past achievements.

His word, “My valued BJAN members I want to thank all of u for the unflinching support you’ve offered to me and my executive in the last 3 years. Specifically I thank my former Vice Chairman and Secretary, Princewill Ekwujuru and David Audu respectively for all their support.

“Election is over, let join hands and take our great Association to the next level.

“Let me reiterate that there is no faction in this family union, everyone particularly those in my previous exco will form integral part of this new executive. No election can divide us.

The contestant for the post of Financial Secretary, Suleiman Idris, also followed Mr. Azubuike Nadoze’s decision to withdraw from the race which however changed the tension of the election.

The post of Vice Chairman was won by Clara Okoro, with 27 votes to defeat the incumbent Vice Chairman, Mr. Princewill Ekwujuru, who got 12 votes.

A cross session of the newly elected executive members of Brand Journalists Association of Nigeria (BJAN) and members of the electoral committee of the association with the representative of Mr. Deji Elumoye, Chairman, Nigeria Union of Journalists (NUJ) Lagos State chapter, Mr Ben Ibe (middle) after the election in Ibadan on Saturday

Richard Edoki, emerged unopposed as the Assistant Secretary of the association while the post of Secretary went to Lukman Ishau, following the decision of the incumbent Secretary, Mr. David Audu, to also throw in the towel few hours to the election.

Meanwhile, the post of treasurer which was keenly contested went to Dickson Akinwumi with 26 votes against Prince Ayodeji Ademigbuji who got 13 votes, while Mr. Kayode Adelowokan, emerged unopposed as the Auditor for the Association.

The election was witnessed by Mr. Ben Ibe, an ex-official of the Nigeria Union of Journalists (NUJ) Lagos State chapter, who represented Mr. Deji Elumoye, Chairman, Lagos NUJ, commended the spirit of brotherly love among members of the Association for the level of maturity shown during the electioneering process.

Ibe described the election as the most beat election witnessed in the history of Lagos NUJ.

He however charged the new executives and members of the Association to continue to uphold the tenet of journalism.

Related Topics:Ofose gets second term as Brand Journalists Chair
Up Next