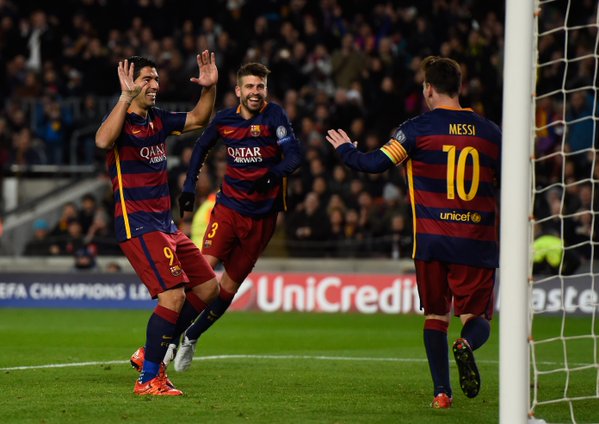 The Catalans and Bayern Munich both secured their places in the knockout draw and demonstrated once again why they are surely the best teams in Europe just now, with Bayern Munich crushing Olympiakos 4-0 at the Allianz Arena

Holders Barcelona celebrated qualifying for the last 16 of the Champions League with another stunning display on Tuesday, Luis Suarez and Lionel Messi both scoring twice in a 6-1 win against Roma.

The Catalans and Bayern Munich both secured their places in the knockout draw and demonstrated once again why they are surely the best teams in Europe just now, with Bayern Munich crushing Olympiakos 4-0 at the Allianz Arena.

Barcelona discovered they had qualified from Group E before they had even kicked a ball at the Camp Nou, the 1-1 draw between BATE Borisov and Bayer Leverkusen in Belarus ensuring their passage.

Fresh from crushing eternal rivals Real Madrid 4-0 at the Santiago Bernabeu at the weekend, they then produced a performance that the Italians could not live with to secure top spot in the section.

Dani Alves set up Suarez to tap in the opener before Messi, captaining the side in his first start since returning from injury, made it two at the end of a superb move involving Neymar and Suarez.

Suarez struck again just before the interval with a sweet volley and the rout continued in the second half as Neymar, Suarez and Messi all combined to give Gerard Pique a tap-in.

Neymar and Suarez then helped tee up Messi to get his second and Barca’s fifth on the hour and Adriano crashed in the sixth after Neymar’s penalty had been saved by Wojciech Szczesny.

Roma’s misery was compounded when Edin Dzeko had a late penalty saved by Marc Andre ter Stegen, although Dzeko did pull one back with the last kick of the game.

BATE opened the scoring in the second minute in Belarus when a Mikhail Gordeichuk shot squirmed under Bernd Leno in the away goal, but Admir Mehmedi equalised in the second half.

Roma still have their destiny in their own hands, though — a win at home to BATE next month will see them finish second.

Dell accepts security flaw was built in to computers