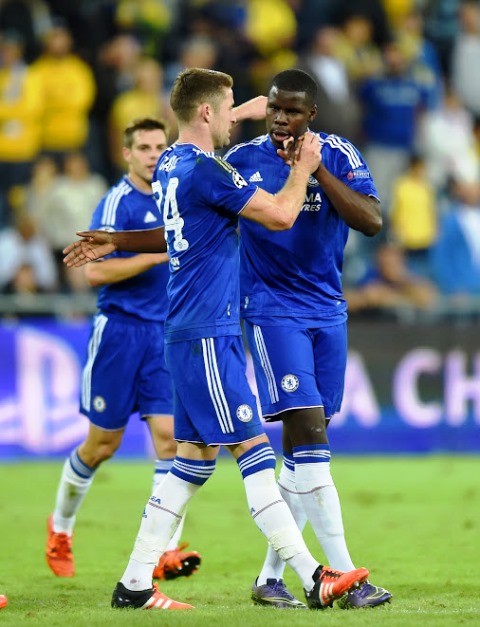 Chelsea cruised to an easy 4-0 Champions League victory over 10-man Maccabi Tel Aviv in Haifa on Tuesday to close in on the last 16.

The victory, coupled with Dynamo Kiev’s 2-0 win at Porto, means Chelsea only need a draw at home to the Portuguese in two weeks to guarantee their passage to the knockout stage.

Chelsea turned the screw in the last 17 minutes as Brazilians Willian and Oscar, and French centre-back Kurt Zouma all found the net.

“Very important, especially with what happened in Porto we really needed to win this match, and also important to get two victories in a few days,” Chelsea manager Jose Mourinho told BT Sport.

The London club have been struggling for form all season but this victory follows a 1-0 home win over Norwich City in the Premier League at the weekend and Mourinho added: “I hope morale comes, tranquility comes, confidence comes.”

The Israeli champions got off to a promising start as midfielder Dor Peretz sent a header just wide on three minutes.

In the fifth minute, Maccabi defender Eli Dasa had another opportunity to give the hosts, who had lost all their previous group games, a surprising lead, but he was way off target with his shot.

Chelsea controlled possession and had created several dangerous chances before taking a deserved lead in the 20th minute when centre-back Cahill tapped in a rebound following a wonderful save from goalkeeper Predrag Rajkovic.

But perhaps the most pivotal moment came in the 40th minute when the referee controversially gave Ben Haim a straight red card for kicking out at Diego Costa.

Despite being down to 10 men, Maccabi got off to a determined start in the second half but they couldn’t threaten Asmir Begovic’s goal.

In the 73rd minute, Brazil international Willian scored a spectacular free-kick that left Rajkovic rooted to his line.

Some Maccabi supporters began heading for the exit but there was worse still to come for the hosts as Zouma headed home deep into injury time.

Chelsea had also defeated Maccabi 4-0 at Stamford Bridge in the opening group match.

The result meant the Israelis can no longer even finish third and qualify for the Europa League.

Chelsea are level on 10 points with Porto while Dynamo Kiev are two points further back.

All three could finish level on points at the end if the Ukrainians win at home to Maccabi and the other two sides draw in west London.

In that case, Dynamo would win the group and Porto would drop into the Europa League.

Related Topics:close in on last 16UEF: Chelsea demolishes Maccabi Tel Aviv
Up Next