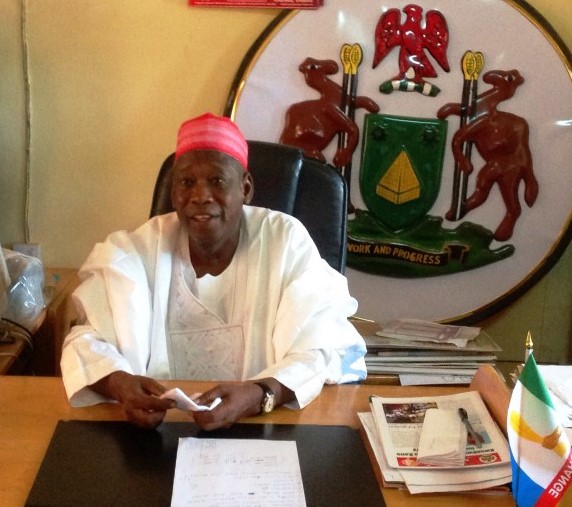 As part of his re-planning strategy, Ganduje inline President Mohammadu Buhari’s change agenda re-introduced Anti-Corruption Commission under Office-of-the-governor to curb corruption and block leakage in order to get more funds for development of the state. Kano State anti-graft commission discovered embezzlement of the public money taking place at Kano Road Traffic Agency (KAROTA) and Refuse Management and Sanitation Board (REMASAB)

The Kano State Governor, Dr. Umar Ganduje within the last 180 days has been impacting on every sector of the state despite the financial challenges facing all states due to fall in global oil price.

Governor Ganduje who served as deputy governor for eight years is familiarly with the administration, so immediately commenced re-planning and rescheduling of the state after his swearing-in.

The Governor in his inaugural speech on May 29, 2015: “I am part and parcel of the Kwankwaso’s administration and whatever must have happened; we all should take the responsibility. On the issue of liabilities, yes, it is correct that we have huge liabilities, but that does not mean that it is a crime, we planned everything together with my boss (Kwankwaso); but unfortunately, what we envisaged did not work as the price of oil came down. So, what do we do? We could not complete the projects because of lack of funds—that is not a problem. Now, it is a matter of re-planning and rescheduling.”

As part of his re-planning strategy, Ganduje inline President Mohammadu Buhari’s change agenda re-introduced Anti-Corruption Commission under Office-of-the-governor to curb corruption and block leakage in order to get more funds for development of the state. Kano State anti-graft commission discovered embezzlement of the public money taking place at Kano Road Traffic Agency (KAROTA) and Refuse Management and Sanitation Board (REMASAB). The investigation panel was immediately raised and all the casual workers that were used as conduit pipe for siphoning public treasury were suspended.

He also established Due Process Bureau to institute due diligence and reform culture in the operation of government to promote good governance in Kano State.

Kano State has adopted Single Treasury in line with federal government policy to ensure financial prudency in the state. Governor Ganduje also reduced of allowances of all political appointees by 50 per cent to accrue more revenue for development that will be beneficial to the masses who voted massively for APC during April 2015 governorship election.

Dr. Ganduje understands that conducive environment will boost their productivity of lawmakers; he therefore renovated Kano State House of Assembly Complex and furnished office of Speaker and other honorable members.

Kano state government has earmarked N1 billion for storage facility of rice and wheat that would be produced by farmers in the state. The governor also approved N100 million for the procurement of improved wheat seeds for the farmers.

In health sector, the state government has spent N2billion on drugs and medical equipments for patients and hospitals to address health challenges in the state. This administration also purchased153 tricycle ambulances for transporting pregnant women to hospitals to ensure their safe delivery. Without mincing word Ganduje’s administration is committed toward bringing affordable and quality health care services to people of the state.

Kano state government is partnering with government of Australia to get grant scholarships for indigenes of the state, to enable them acquire post graduate education in the country.

According to Ganduje, “Naturally, because of our population, Kano being the most populous state in Nigeria, we are looking forward to your country’s scholarship opportunity for our young men and women so that they can further their education and contribute more meaningfully to nation building”.

The Kano State Executive Council has approved N342 million for procurement of aluminum sulphate and polymer for water treatment to enhance potable water supply in the state.

Ganduje led administration recently released N296 million for the purchase of 16 trucks for waste evacuation. The trucks will enhance waste evacuation by be used by the state Refuse Management and Sanitation Board (REMASAB). REMASAB has promised begin the conversion of wastes to wealth before the end of 2015.

Kano State government in October introduced biometric time and attendance machine for monitoring workers punctuality in their various places of work. Public Relations Officer in the office of the Head of Service, Alhaji Mustapha Fagge said the machine was introduced to boost productivity of civil servants and not to witch-hunt anybody. Governor Ganduje is also paying workers’ salaries and bonuses promptly.

Governor Umar Ganduje administration has mobilized contractors to continue on-going road construction across the 44 local government areas in the state.

Kano State government is also working security with security agencies to ensure security of lives and properties of people living in the state. The Kano State Police Command has arrested over 100 Castle Rustlers terrorizing Castle farmers.

His Excellency is working India, Canada and other countries to bring foreign investors to Kano State.

Indeed Kano State is indeed in safe hands with Dr. Umar Ganduje as governor. No doubt there are brighter and rewarding days ahead of Kano State.

Related Topics:Ganduje’s 180 days of steady progress in Kano
Up Next