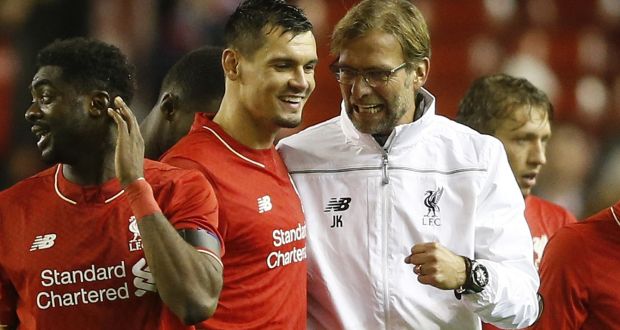 Liverpool and Tottenham reached the Europa League last 32 on Thursday while Scottish interest in continental competition came to another sobering end when Celtic were knocked out.

Jurgen Klopp’s Liverpool defeated Bordeaux 2-1 at Anfield having endured the worst possible start when injury-plagued England striker Daniel Sturridge’s comeback from a knee injury stalled when he hurt his foot in the warm-up.

The English side then fell a goal down in the Group B clash in bizarre fashion after 33 minutes when goalkeeper Simon Mignolet was penalised for time-wasting.

Belgian star Benteke then hit what proved to be the winner in first-half injury time with a rasping right-footed drive.

Kane’s decisive second half goal assured the Group J leaders qualification into the knockout stages with a game to spare.

The North Londoners could probably have done without the 8 000 kilometre-round trip to the Azerbaijan capital just three days before the visit of Chelsea to White Hart Lane.

Despite the imminent arrival of the ailing Premier League champions Spurs coach Mauricio Pochettino fielded a strong side at Qarabag’s Azersun Arena in Baku.

The first hour was unforgettable, the game finally bursting into life when forward Son Heung-min smashed a shot from the edge of the box with the ball hitting the crossbar.

Qarabag’s Spanish winger Dani Quintana then forced Spurs’ keeper Hugo Lloris into action down at the other end.

Having sprung to life Tottenham looked the more likely to break the deadlock, and in the 78th minute they deservedly took the lead.

Christian Erikssen fired in their umpteenth corner from the left with in-form Kane flicking in Son’s header.

“Very happy to be qualified! It wasn’t easy but delighted with the win!” tweeted Kane.

Pochettino added: “The objective is gone now. We will make sure we will arrive in a good condition to play Chelsea. We have a strong squad and a strong mentality, with the maturity.”

Scottish champions Celtic slumped to a 10th consecutive Europa League game without a win – a 2-1 loss at home to Ajax in Group A.

Callum McGregor had given Celtic a fourth-minute lead at Parkhead but Arkadiusz Milik levelled in the 21st minute for the Dutch side.

Elsewhere, Russian side Krasnodar ran out 1-0 winners over already-qualified Borussia Dortmund to go through from Group C.

Also through were Spaniards Villarreal courtesy of Viktoria Plzen’s 1-0 loss to Minsk.

Swiss champions Basle drew 2-2 with 10-man Fiorentina to go through from Group I while Sporting Lisbon boosted their prospects of escaping from Group H with a 4-2 win at Lokomotiv Moscow.

Lazio continued their Europa League campaign with 3-1 win over Dniepropetrovsk while Sporting Braga went through from Group F thanks to a last-minute winner in a 2-1 home win against Slovan Liberec. (AFP)