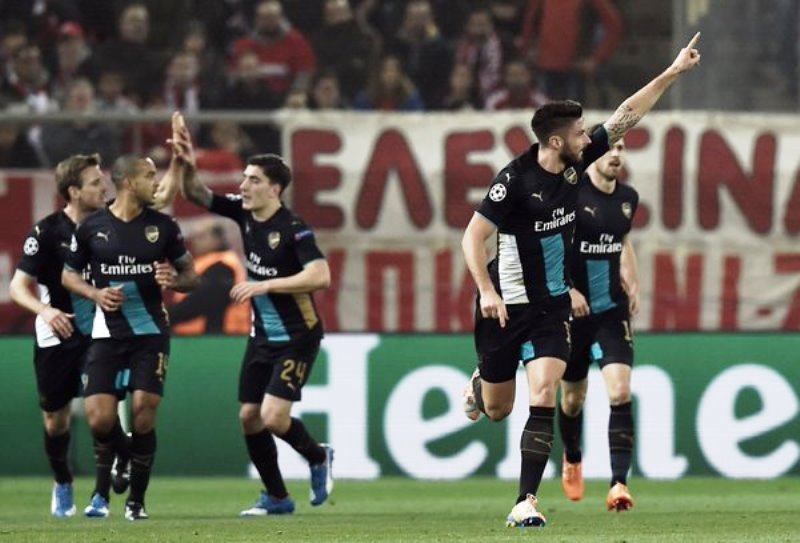 After Mathieu Flamini struck the crossbar, Giroud opened the scoring with a near-post header shortly before the half-hour mark

Arsenal secured their passage to the knockout stages of the Champions League for the 16th straight season as Olivier Giroud’s hat-trick earned them a hugely impressive 3-0 victory at Olympiacos.

Arsene Wenger’s side came into Wednesday’s clash in Greece knowing a victory by any scoreline other than 1-0 or 2-1 would see them leapfrog their opponents and claim second spot in Group F.

Having lost the reverse fixture in September 3-2, the odds appeared to be against the visitors but Arsenal – who had tasted defeat in three of their first four group games to leave their hopes hanging in the balance – showed admirable steel and a clinical edge to avoid being eliminated from the opening group stage of the competition for the first time since 1999-2000.

After Mathieu Flamini struck the crossbar, Giroud opened the scoring with a near-post header shortly before the half-hour mark.

And the Frenchman doubled his tally with the crucial second goal early in the second half, getting on the end of Joel Campbell’s excellent pass to slot home.

Midway through the second period, Omar Elabdellaoui was perhaps harshly penalised for handling Nacho Monreal’s shot, and Giroud coolly converted the spot-kick for his first Arsenal hat-trick that sends Wenger’s men through as runners-up behind Bayern Munich.

Roared on by the vociferous home support, Olympiacos had made the brighter start and the first serious effort on goal arrived in the 20th minute when Seba fired narrowly off target from the edge of the box.

Arsenal burst into life five minutes later, though, and went agonisingly close to going in front.

Former Olympiacos loanee Campbell got free down the right and his cutback found Flamini, whose effort took a slight deflection off Manuel da Costa and struck the bar.

Arsenal did not have long to rue their ill-fortune, however, as in the 29th minute Aaron Ramsey crossed from the left for Giroud and the Frenchman’s header crept under Roberto into the bottom-left corner.

Olympiacos’ response was strong and Laurent Koscielny had to be alert to divert Felipe Pardo’s dangerous cross away from the lurking Brown Ideye.

There was concern for Arsenal at the start of the second period when Giroud fell awkwardly on his right ankle, but he soon recovered to make another telling contribution.

Related Topics:UCL: Giroud shines as Arsenal trump Olympiacos
Up Next