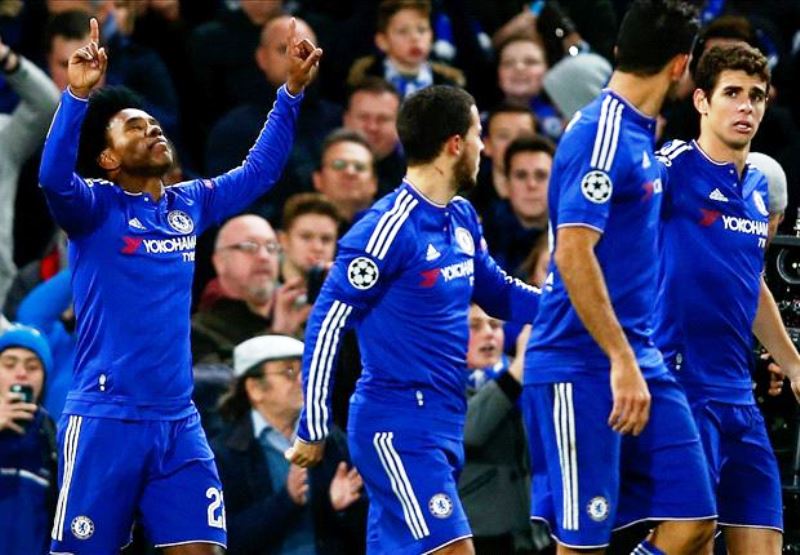 Chelsea tied up top spot in Champions League Group G with a comfortable 2-0 win over Porto, who finish in third place and fall into the Europa League.

Jose Mourinho’s men knew that a win would guarantee first place and the Premier League champions ensured they would avoid Europe’s top sides in the second round thanks to an early own goal and Willian’s second-half strike.

Costa, on the bench in the Blues’ last two games, had a hand in the hosts’ hugely fortuitous opener when his saved effort rebounded in off Ivan Marcano.

Porto threatened in spells, knowing a victory was always likely to be required with Dynamo Kyiv recording the win expected of them against Maccabi Tel Aviv in Ukraine.

Maccabi’s failure to spring an upset means the Portuguese side now head into the Europa League, with Willian sealing victory for Chelsea seven minutes into the second half.

Amid a subdued atmosphere at Stamford Bridge, Chelsea appeared nervy in the opening stages but were handed a huge slice of fortune for their 12th-minute opener.

Eden Hazard set Costa in on goal for Chelsea’s first meaningful chance of the game and when the striker’s effort was saved by Iker Casillas, it hit Marcano and bounced over the line despite Maicon’s best efforts to clear.

Oscar saw a penalty appeal waved away after going down with Marcano in his vicinity and the Brazilian then sent a deflected shot just wide before the half-hour mark.

Costa dragged an effort wide of Casillas’ right-hand post as Chelsea edged the final stages of the half, with Willian’s powerful drive testing the former Real Madrid goalkeeper early after the restart.

Jesus Corona’s curled strike forced Thibaut Courtois into a smart save but Willian would not be denied with his next attempt, drilling past Casillas from 18 yards after being played in by Hazard.

With Kyiv leading, Porto threw caution to the wind and Yacine Brahimi curled an effort wide before Courtois tipped substitute Cristian Tello’s effort around the post.

But Chelsea remained in control – Hazard hitting the post late on – and an improved display ensured Mourinho had something to smile about in what has been a difficult campaign. Porto are left to focus on Europa League football.

Related Topics:UCL: ‘Struggling’ Chelsea cruise into last 16
Up Next