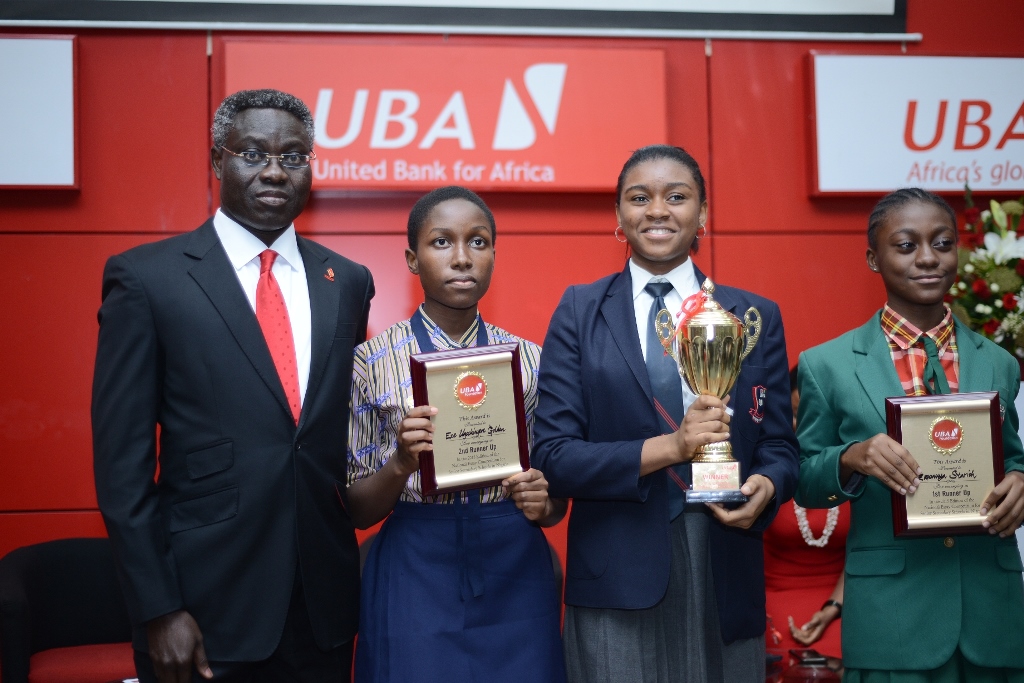 Winners have emerged in the fifth edition of the UBA Foundation National Essay Competition for Senior Secondary Schools in Nigeria.

Emediong emerged the winner from over 3,326 entries received across the country.

Speaking during the event at the bank’s headquarters in Lagos, GMD, Phillips Oduoza, commended all the participants and the schools for encouraging the students.

Oduoza explained that the digital age of technology called for increased interest in reading culture among youths, adding that this had led to the decision of UBA, through its foundation, to begin the Essay Competition.

He said, “UBA Foundation believes in sustainability and in supporting of the environment where we operate, and that is why we have earmarked a certain percentage of our profit to this end.

He noted that the competition which started in 2011 in Nigeria had also be extended to Ghana and Senegal which had also produced winners in the last few years.

Stressing the nuggets for success, he said, “Reading is essential to broaden your knowledge and horizon and most importantly youths should maintain self-discipline and ensure that they determine their career part and get mentors to assist them in their goals.

He also explained that the bank remains committed to dedicating resources towards grooming world leaders, because UBA believes so much in the youth and their ultimate success.

On her part, the MD/CEO, UBA Foundation, Miss Ijeoma Aso, commended the participants and expressed delight at the increase level of participation recorded this year.

She said, “compared to the last edition, we had an increase of almost 100 per cent in the number of entries received, and this shows that there is a growing level of awareness amongst the youth.”

She added that the impact of UBA Foundation is being felt by many educational institutions and communities in Nigeria.

According to her, the initiative is not only to test the aptitude and knowledge of our students but has become a pipeline to groom future UBA Ambassadors, adding that the winners who would go to any university of their choice in Africa would remain part of the UBA family provided they are of good behavior and remain focused.

“In UBA we appreciate and nurture talents. All the finalists here today have opportunity to excel in life and UBA is delighted to play a part in the process,” she noted.

Each of the 12 finalists received a laptop as a consolation prize for getting to the final of the competition.

As a the CSR platform for the UBA Group, UBA Foundation works through four areas of focus, education, economic empowerment, environment and special project. Communities across Nigeria and other parts of the continent continue to benefit from the foundation through these focus areas.

Aregbesola did not order delisting of any institutions – Osun govt