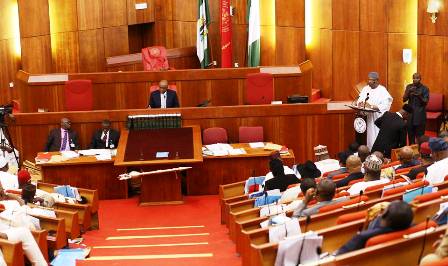 The Senate has begun an investigative hearing to unravel allegations of abuse of the Treasury Single Account regime (TSA).

President Buhari had given a directive that all government Ministries, Departments and Agencies should pay all revenues and monies accruing to the Federal Government into a Federal sub Treasury Account maintained by the Central Bank of Nigeria (CBN).

However, federal lawmakers on December 11 at legislative proceedings, expressed fears that the private firm hired to mop up government’s revenue into the account was costing the nation billions of Naira in fees.

A lawmaker had said that it was a gross violation of section 162 (1) of the Nigerian Constitution and the banks and other Financial Institutions Act.

They gave their disapproval to a one per cent commission, which the private firm was allegedly collecting to mop up revenue.

Last week, the Senate Committees on Finance, Banking and Other Financial Institutions began an investigative hearing to get to the bottom of allegations of the abuse of the TSA.

At the hearing, the CBN Governor, Godwin Emefiele, in his presentation, disclosed how much had been pooled into the Treasury Single Account so far.

He also made an observation as regards the one per cent commission which had been the bone of contention.

The Accountant General of the Federation, Ahmed Idris, completely disassociated himself from the contract signed with Systemspecs to provide the e-collection platform.

The Managing Director of Systemspecs, John Obaro, however, had a different version.

The Senate President and the chairman of the Joint Committee, Senator John Eno, emphasised that the purpose of the investigation was not to witch-hunt anyone but to ensure that due process was followed in government transactions.

The investigative hearing is expected to continue on Tuesday December 15.

Stop the attacks on our Livelihoods in the informal sector now, FIWON tells FG