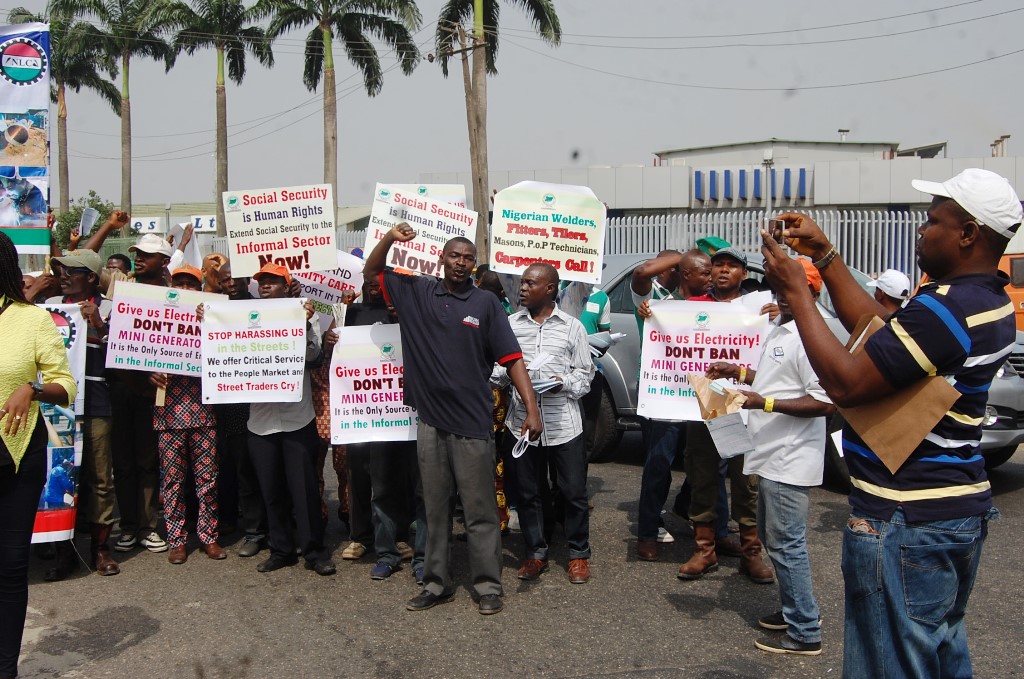 The Federation of Informal workers’ Organizations of Nigeria (FIWON) with 170 affiliate informal sector organizations in Nigeria in 21 states of Nigeria hereby uses this medium to cry out at the new spate of attacks on poor working people in the informal sectors of the Nigerian economy. Specifically, we protest very vehemently the recent ban on importation of mini generators by the Federal Government. Available records show that current supply of electricity at 3, 262.4 megawatts represents only about 1.6% of the estimated need of 200, 000MW in Nigeria. The Manufacturers Association of Nigeria (MAN) and the National Association of Small Scale Industries (NASSI) have estimated that their members spend an average of about NGN2 billion (about $12 million) per week on self-power generation. It is worthy of note that that estimate does not include the expenditure on self power generation by micro business and informal workers. The Nigeria Customs service (NCS) has offered the rather vacuous argument that the ban is informed by the fact that the mini generators are “… causing air pollution and destruction of our lungs and breathing system”. While this reason sounds good, it raises very big issues:

It would appear therefore that singling out the mini generators is not necessarily bourn out of a concern for our well being but an attempt to scapegoat poor working people in the informal sectors of the economy that largely depend on this generators to power their little workshops and businesses. Given that these are also the big vote banks that voted in the government, it is a most unkind punitive pay back that threaten our right to employment and decent livelihood.

We also use this opportunity to point out the extremely damaging policy of the management of the Dangote Group of Companies to continually import foreign workers to perform skilled and unskilled jobs that Nigerians are eminently qualified to perform in flagrant violation of the local content law. Badly affected by this are certified welders and fitters, construction workers such as tillers, plaster of paris (p.o.p.) technicians, masons, carpenters etc. The standard practice has been to bring in Indian and Chinese as well as Togolese workers to perform these tasks. But Section 3(2) of the Act specifically stipulates inter alia that“….exclusive consideration is given to Nigerian indigenous service companies which demonstrate ownership of equipment, Nigerian personnel and capacity to execute such work on land and swamp.” Also, Section 37, 38 and 39 of the Act requires operators to submit a programme for the ‘promotion of education attachments, training, research and development’ of local personnel by operators. It is sad to note that while foreign companies have tried to comply with this law by training and retraining local personnel to perform these low skill jobs, local employers such as the Dangote Group and even some state governments have preferred to import workers violating the Local Content Act and the Expatriate Quota Policy with alarming impunity at a time a lot of Nigerian youths are dying for lack of employment opportunities.

FIWON also uses this medium to inform the general public that its members will embark on public demonstration to back up this demand first in Lagos and then in other parts of the country. The first demonstration will take place in Lagos on December 10, 2015, the United Nations Human Rights Day, for this is a serious human rights issue for informal workers; the right to livelihoods!

Related Topics:FIWON tells FGStop the Attacks on our Livelihoods in the informal sector now
Up Next