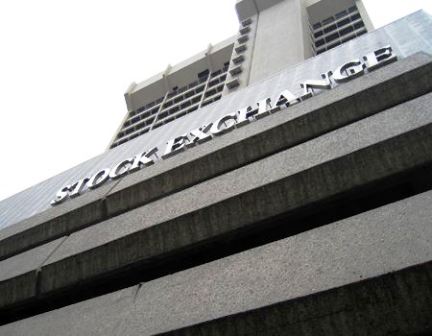 Trading on the Nigerian Stock Exchange (NSE) for the week ended on Friday, December 18, 2015 closed negative with the benchmark indices of the All-Share Index and Market Capitalization depreciating by 2.69 percent each to close the week at 26,537.36 points and N9.124 trillion respectively.

Statistics for the week under review also showed that all other indices finished lower with the exception of Insurance Index and Oil and Gas Indices that rose by 1.02 percent and 0.23 percent respectively, while the ASeM Index closed flat.

The Financial Services Industry in terms of volume of trading led the activity chart with 993.154 million shares valued at N4.417 billion traded in 7,283 deals; thus contributing 68.18 percent and 32.00 percent to the total equity turnover volume and value respectively.

The third place was occupied by the Conglomerates Industry with a turnover of 49.140 million shares worth N193.919 million in 659 deals.

At the close of trading for the week, twenty-seven equities appreciated in price in contrast to 25 equities of the preceding week.

Forty-one equities depreciated in price as against 37 equities of the previous week, while 122 equities remained unchanged, higher than 128 equities recorded in the preceding week.

There was no transaction recorded on bonds this week. However, a total of 10,501 units of Federal Government Bonds and one State Government Bond valued at N12.024 million were transacted last week in 5 deals.

NIPR makes case for information officers to be members