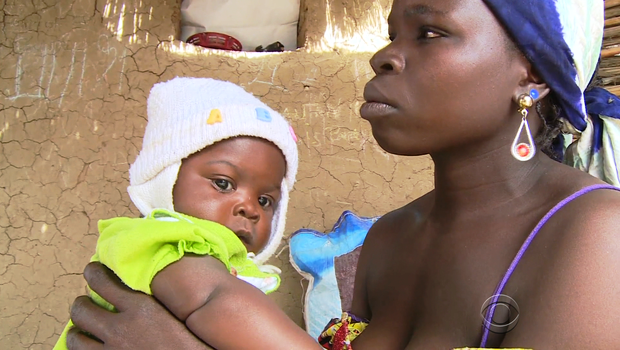 Aisha Musa, was one of the women rescued by the Cameroonian military recently from the Boko Haram hideout and has since been living in the crowded Minawao refugee camp for seven months.

Aisha survives by selling corn meal at the local market but has not enjoy any show of love from others in the camp.

She was kidnapped by Boko Haram militants. They killed her family, and forced her at gunpoint to become a jihadi bride.

“They show you a gun, and then whatever they say you have to follow their command,” Musa said.

She told CBS News her captor would lock her in during the day. At night, he would rape her.

“He would go on operations and kill people, and then come home and force me to be with him.”

Musa was rescued by the Cameroon military, but the worst of her ordeal was finding out she was pregnant by her rapist.

“I am not enjoying that I have a baby from a Boko Haram man,” she said. But she is resigned and there are moments of tenderness between her and her young child.

Musa’s story is not unusual. Boko Haram has captured hundreds of girls, the most infamous kidnapping was the 200 Chibok schoolgirls taken more than 18 months ago.

Musa never saw the Chibok girls but often heard the fighters speak of them. Like many of the other girls, they too were forced to marry the militants.

In a double injustice, many are now stigmatized by their community. Girls like Musa are regarded as spoiled goods — her baby a very public reminder of a cruel and unfair shame. (Additional report from CBS News)

Related Topics:PATHETIC! Community rejects woman with baby from Boko Haram den
Up Next