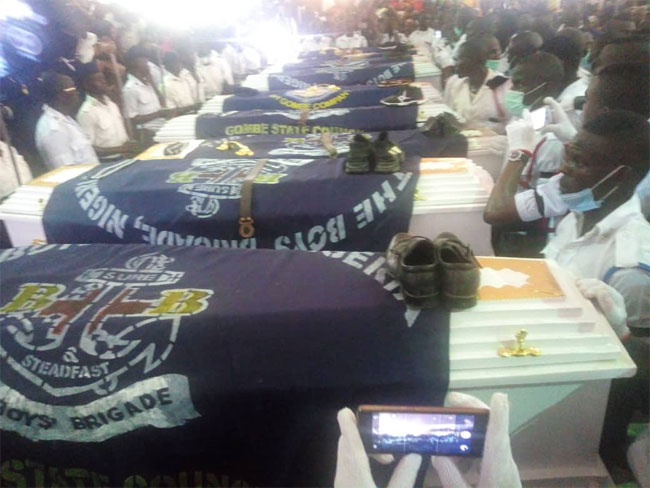 Saturday morning Gombe State was filled with tears and wailing as the slain members of the Boys and Girls Brigade have been laid to rest.

A funeral service was conducted in their honour at the Christian Association of Nigeria (CAN) Centre in Gombe, the state capital.

In attendance were members of the families of the nine victims and hundreds of sympathisers who paid tributes to them.

Charles Iliya, Deputy Governor of the state was also at the event in company with some government officials in the state.

Shortly after the service, the nine members of the brigade were buried amid tears at the cemetery along the Gombe – Yobe Road.

Earlier, some members of the brigade and other youths held a procession in the state capital to honour their slain colleagues.

There was, however, tension as another group of people intercepted the demonstrators and prevented them from continuing with the procession.

The incident turned violent but was later brought to calm following the intervention of security operatives.

The victims, aged between 11 and 21, were killed following a dispute between members of the brigade and a security operative while on a procession to mark Easter.