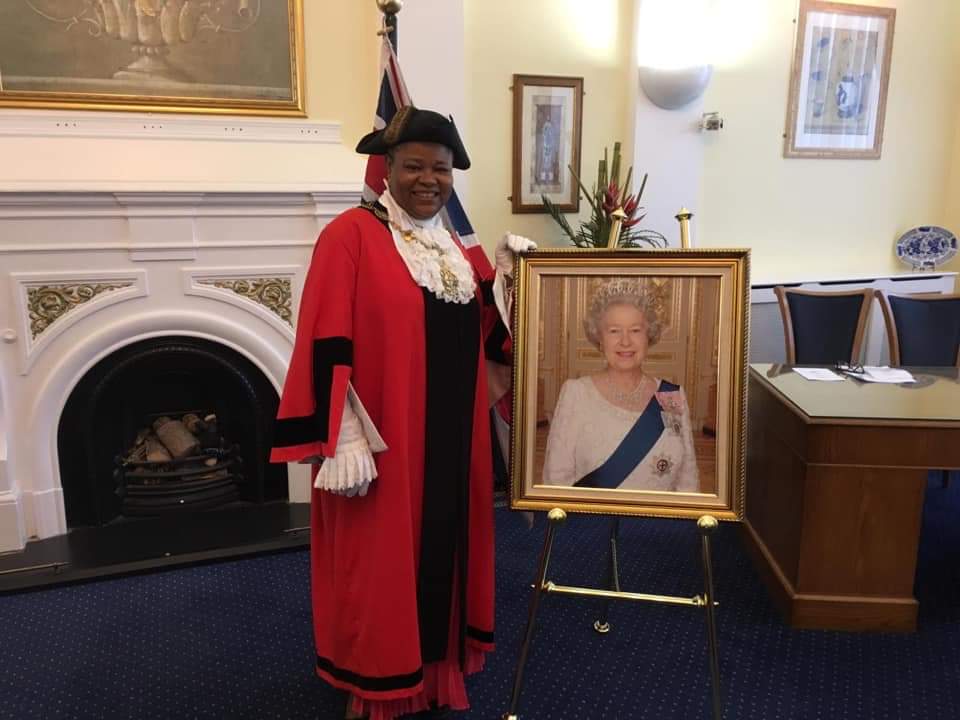 Mrs Victoria Obaze, a Nigerian from Imo State made history on Wednesday after she was sworn into office as the first black female Civic Mayor of London Borough of Tower Hamlets, United Kingdom (UK).

It was reported that Obaze’s inauguration on Wednesday is the latest in turn of events that have seen Nigerians emerge as Mayors in their area councils of residence in the UK.

It will be recalled that Mr Ernest Ezeajughi, and Mrs Kate Anorue, both from Anambra State, were recently sworn into office as Mayors of London Borough of Brent and Enfield, respectively.

Obaze who contested three previous councillorship elections in 2010, 2014 as well as 2016 and failed, eventually succeeded in an election conducted on May 5, 2018 in Whitechapel Ward.

She later became the Council’s Deputy Speaker following her nomination by her Councillor Colleagues from where she took over the mantle as Mayor of London Borough of Tower Hamlets.

A statement containing brief history of Obaze obtained by NAN from her close associate and UK Chapter Coordinator, Ugonwanne Social Club Nigeria Int’l, a Nigerian socio-cultural group in UK, Ms Blessing Chijekwu, revealed that the newly sworn-in Mayor had lived in Borough for over 30 years.

“For Councillor (Cllr) Obaze life is all about service to humanity with diligence. Her political experience started when she was elected as one of the board of directors to oversee the regeneration of her area, the Ocean Estate, in the 1980s.

“The move motivated her to get into politics having noticed that there were no black women in the council chambers and this led her to open a project named Healthy Life Style for Stepney Women, East London.

“The project was funded by local authority through Ocean African Caribbean Association which she and her late husband Chief Evangelist Charles Obaze, co-founded.

“She also established Ocean Saturday School aimed at ensuring school attainment for children, as well as Ocean Football Club through which young boys were able to have residential football experiences with Chelsea football Club.

“Above all, Cllr Obaze loves God with a passion; she is a member of Parochial Church Council (PCC), as well as an Executive Council member at St Dunstan’s Church of England Parish in Stepney.

“She is also a Secondary School governor in Tower Hamlets and a habitual visitor to the elderly and physically challenged in the community,” the statement quoted Chijekwu as saying.

The statement also quoted Lolo Ngozi Nwanze, President, Ugonwanne Social Club Nigeria Int’l as saying that Obaze was chosen as life matron of the club because of her meekness and morality.

“These are the virtues that have brought her to where she (Obaze) is today.”

She also has certification in childcare which enabled her operate a registered charitable childcare centre in UK named Vicharles Play Centre.