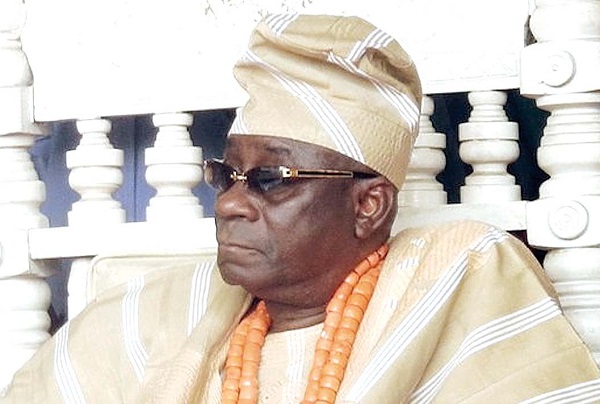 The Oba of Lagos, Oba Rilwan Akiolu on Wednesday said the election of President Muhammadu Buhari for a second -term in office was a clear proof that no man, but God gives power.

Akiolu made the statement when participants of the Senior Executive Course 41 of the National Institute of Policy and Strategic Studies (NIPSS), Kuru, visited him in his palace in Lagos.

It was reported that the visitors who were on study tour of the state were led by Dr Nasirudeen Usman, NIPSS Acting Director of Studies .

Akiolu said the president got his second term mandate from God through the people of Nigeria.

He said the claim by former President Olusegun Obasanjo prior to the election that Buhari would not win the election because he did not support him had been neutralised by the president’s triumph.

Akiolu said Obasanjo had always arrogated to himself the divine power to determine the country’s leaders, adding that Buhari’s victory in the last election had demystified him.

Akiolu said he had always believed Buhari would win the election and that he was glad that the former president had been proved wrong at the end of the day.

”I had said that Buhari would win even before the election, unfortunately ,the number one person creating problems in this country is former president Obasanjo.

”He arrogated to himself the powers of the Almighty Allah by saying it was the support he gave to Buhari that made him win the first term.

”Obasanjo said Buhari would not win the second term, but did Buhari not win? Did I not say Obasanjo will be disappointed by the time the results were announced .

”The president’s victory clearly shows power belongs to God only and no man can decide who leads the country”, he added.

Akiolu urged Nigerians to support the president to deliver the goods as he begins his second term in office .

He said the problems of insecurity, unemployment and other challenges of the country would be better tackled if citizens joined hands with government to address them.

The monarch urged politicians to put the issues of the last elections behind them and work together for the progress of the country .

Akiolu advised Alhaji Atiku Abubakar, the presidential candidate of the Peoples Democratic Party (PDP) in the general elections to drop his case against Buhari’s election.

He predicted that Atiku’s case will amount to nought at the end of the day, adding that he strongly believed Buhari had the manadate of Nigerians and would finish his term in office.

”If anyone of you here is close to Atiku, tell him he can never succeed in what he is doing now.

”Buhari will complete his term in office, but Buhari too has to listen to.the people, pray to God and be honest in what he is doing ”, he said.

The monarch commended the visit of the NIPSS Executive course participants to the state, saying the state would benefit from the study tour of the delegation.

The Oba said he was particularly glad that the focus of the tour was to understand the challenges affecting healthcare delivery system in the state with a view to providing solutions.

Akiolu stressed that qualitative healthcare system was key to improved life expectancy, adding that there was a link between it and development.

He advocated increased budgetary allocation to the health sector in line with World Health Organisation standard.

Akiolu described the NIPSS as a good initiative that had helped shaped policy formulation in the country.

The monarch said he was once a participant in a course at NIPSS as a police officer and that he still lived with the experience till date.

Speaking, Usman said the visit was to pay respect to the monarch as it was the norm for participants to visit distinguished personalities anywhere they went.

He said the NIPSS participants were on the study tour of the state to study and assess its universal health care delivery system.

”Your Royal Highness, you will agree with us that universal healthcare system is quite an issue in the country.

”We have been in the state since the beginning of the week to engage stakeholders in the health delivery sector, to interact with them and find out the challenges facing the sector .

”At the end of the day, we will present a copy of our report to the state government with the expectation that it would implement our recommendations to improve healthcare in the state”, he said.

Usman said the Federal Government had over the years supported the institute to help in formulating policies for national development.