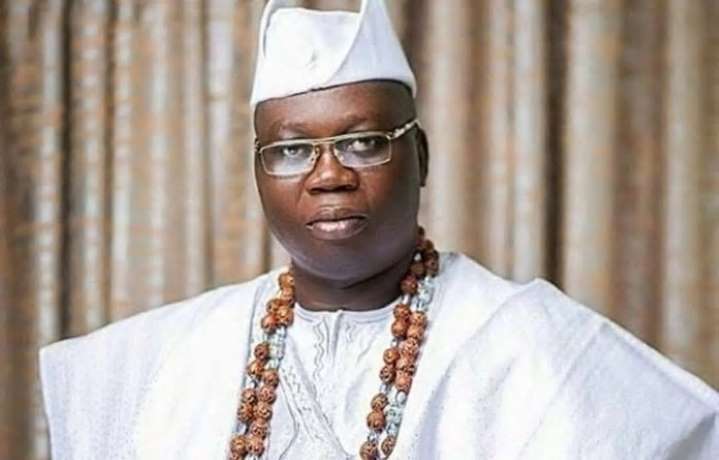 The Aare Onakakanfo of Yorubaland, Chief Gani Adams, on Saturday urged Nigerian youths to embrace peace as the best means to drive home their demands for police reform and other sundry issues affecting the nation.

Adams, in a statement in Lagos signed by his Media Assistant, Mr Kehinde Aderemi, urged the Federal Government to embrace calls for regional government, to solve most of the issues affecting the nation’s unity and progress.

The Aare commended the determination and courage displayed by the youths involved in the peaceful #EndSARS protests before it was hijacked by hoodlums following alleged shooting of protesters by the military.

He said that the Nigerian Youths had also written their names in gold for raising their voices against police brutality and standing up to fight against bad leadership.

Adams, however, commiserated with the families of those that lost their loved ones in the course of the struggle, adding that those that fell to the bullets would surely be remembered as heroes.

He noted that the victims would always live in the minds of Nigerians forever because they had paid the supreme price for liberty and justice, saying that he shared in their griefs and pains.

“I mourn with you. I shed tears with you. I feel your sorrow. Mankind cannot create life and has no right to take one especially the lives of people protesting against an unjust system.

“The loss of one life is a tragedy not to talk of many lives. The deaths were avoidable. The people who lost their lives could have been saved. There was no reason for the vicious attacks on innocent citizens.

“It is therefore, very important for the Federal Government to unravel those behind the kiilings,”the Aare said.

Adams, however, condemned the destruction of private and public property by hoodlums, saying that some of the assets destroyed represented the bedrock of Yoruba political economy and agelong civilisation.

He added: “City Hall, Lagos Television and many others are legacies of Chief Obafemi Awolowo. We condemn in the strongest term this reckless and coordinated attempt to destroy Yoruba economic birthright.”

The Aare urged those trying to put ethnic or tribal colourations to the wanton destructions of private and public property in some parts of Lagos to desist.

Adams urged purveyors of such misinformation to desist from spreading lies against the Igbos, adding that those hoodlums that engaged in the looting and destruction of public properties did that for their selfish end.

According to him, some of the Igbos in Lagos also lost their businesses and properties to the ugly incident.

He said that the attacks had shown how vulnerable Lagos and the entire Yorubaland are, while admitting that there is no strategic plan to protect the cities.

Aare said that he was shocked that while the destruction was going on, none of the political actors in the South-West considered it necessary to reach out to Pan Yoruba groups for assistance in protecting the Yoruba heritage.

“At a critical moment, the strategic assets were left unprotected. This has exposed how insecure we are as a people.

“It is sad that some individuals are now giving tribal and ethic colourations to the incident of destruction and looting across the state.

“Those that hijacked the peaceful protest did that for their selfish interests, and I think the state government must also investigate the whole events that played out during the last three weeks.

“There must be a thorough investigation into the killings and wanton destruction of properties in Lagos, and the government must ensure that perpetrators of that dastardly acts face the full weight of the law.

“More so, I wish to state it clearly that we should embrace peace and stop fanning the embers of tribal wars across the state,” he said.

Making a case for regional government, Adams, urged the Federal and State Governments to work towards returning Nigeria to Regionalism to save the country from imminent collapse and break up.

“Nigeria is a country in perpetual conflict, I call on the National Assembly to initiate the process of returning the country to regionalism to stem the wave of unrests.

“Our leaders are adamant in defending a reckless and self-defeatist system,” he said.

Adams called on the Federal Government to return the country to regionalism using the template of the existing six-geo political zones.

He urged the Federal government to embrace state police, adding that if Lagos and South West states had their own police and internal security, the assets would not have been burnt.