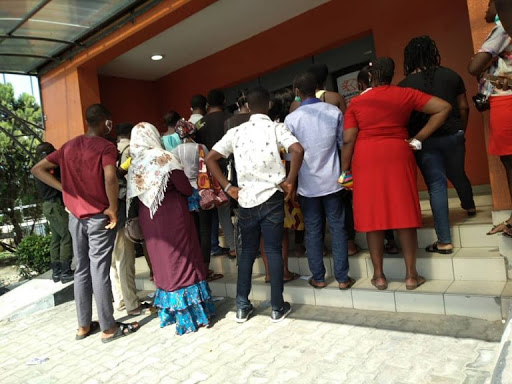 The continued closure of commercial banks in Abakaliki, the Ebonyi capital, in the wake of the violent EndSARS protests in the city, has left many bank customers stranded and frustrated.

Our correspondent reports that banks in Abakaliki closed for business on Monday, when the protest assumed a violent dimension, with the torching of private and public property.

It was learnt that banks decided not to open to public to avoid being attacked by hoodlums.

The protesters razed down the Central Police Station, Onuebonyi and destroyed public buildings as well as private and public vehicles in the city.

It was also reported that major roads in Abakaliki were on Tuesday barricaded by security operatives deployed to strategic locations in the city to help bring the situation under control.

Meanwhile, a cross-section of the residents has decried the alleged hijack of the otherwise peaceful EndSARS protest by suspected hoodlums.

Speaking in separate interviews they called on the security agencies to take immediate steps to bring the crisis to an end.

A bank customer, Mrs Grace Okome, said that the protest had lost its essence and now posed serious threat to the nation’s economy and security.

“Look at how we are suffering. Even in your street, you are not safe. Crime is now on the increase.

“The worse now is that there is no money because the banks are not working and one cannot withdraw money through the ATMs.

“The violent protest has done more evil than good to the people. Everybody is frustrated.

“Even when you have the money, it’s still difficult to buy anything because of the high cost of commodities in the market,” Okome said.

Also, Mr Chimaobi Okafor, regretted that he could not withdraw money to meet his needs because the ATMs were unable to dispense cash.

“I have visited four to five banks but none is working,” he said.

“The protesters are heartless. How can they be destroying private and public property in the name of protest.

“Positive change does not come in an atmosphere of chaos and disorder.

“See how people are suffering. From curfew to where we are now, no access to our own money in the bank.

“Please, they should end the protest to move the state and country forward. The protest has disrupted governance at all levels,” Okafor said.