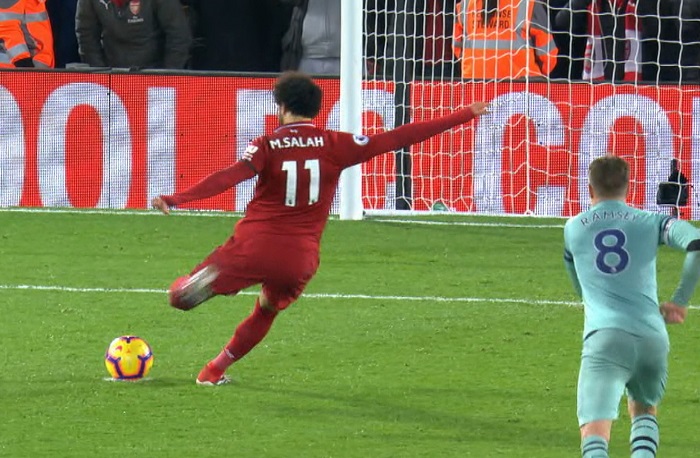 A below-par Liverpool needed a late Mohamed Salah penalty kick to salvage a point in a 1-1 draw at Fulham in the English Premier League (EPL) on Sunday.

The result meant the titleholders squandered the chance to return to the top, after leaders Tottenham had also drawn 1-1 with hosts Crystal Palace earlier in the day.

Fulham led through Bobby Decordova-Reid’s superb 25th minute effort and Liverpool needed returning goalkeeper Alisson Becker and some luck to avoid being further behind at the break.

There was still little of the attacking quality which propelled them to the title last season, however, and it required Salah’s 79th minute penalty kick to earn a point.

It was awarded for a harsh handball against Aboubakar Kamara.

Liverpool joined leaders Tottenham on 25 points from 12 games after Jose Mourinho’s side also drew 1-1 at Crystal Palace in an earlier kickoff.

Fulham stay fourth from bottom with eight points but offered a display to gladden the hearts of the 2,000 fans who were allowed to watch at Craven Cottage.

Klopp’s side have dropped 11 points this season compared to the 15 from the whole of their title-winning campaign.

Skipper Jordan Henderson said Liverpool had been off the pace in the first half.

“We didn’t really get going in the first 25 minutes which in the Premier League you can’t do, you get punished, he said. “The good thing was we reacted well.

Alisson, back after a hamstring injury, was required twice in the opening 15 minutes to deny Ivan Cavaleiro as Fulham dominated the opening exchanges with some slick football.

Liverpool got a lucky break after they were not punished when Cavaleiro appeared to have his standing leg clipped by Fabinho in the area.

Referee Andre Marriner declined to give a penalty kick after going to check a pitchside VAR monitor.

Fulham shrugged off that disappointment though and took the lead when Decordova-Reid dispatched an arrow-like right-foot shot that gave Alisson no chance.

Forced to defend deep after the break, Fulham were edging towards an unlikely win until Liverpool were awarded a penalty kick.

This was when Kamara was adjudged to have used his arm after jumping in the wall to stop Georginio Wijnaldum’s free-kick.

It would have been harsh on Fulham had they been beaten late on, but they dug in to end a run of six successive Premier League defeats against Liverpool.

“I thought in the first half there was some real quality about us,” Fulham manager Scott Parker said.

“The fans played a big part today. We felt the atmosphere before the game and the players showed real spirit.”