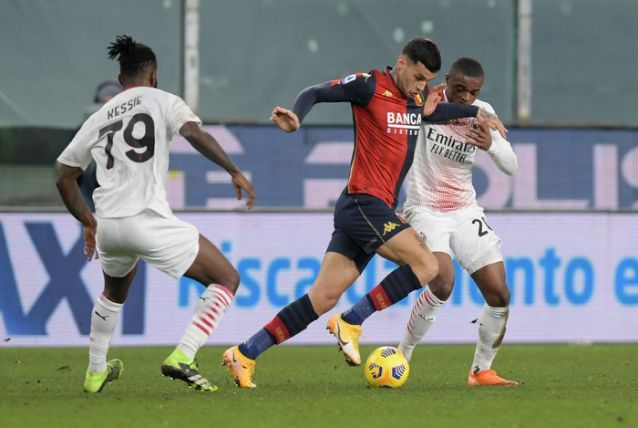 AC Milan twice came from behind to salvage a 2-2 draw at relegation-battling Genoa on Wednesday and cling on to top spot in Serie A.

Genoa striker Mattia Destro scored twice in the second half but on both occasions the hosts were soon pegged back, thanks to goals from Davide Calabria and Pierre Kalulu.

Milan, who came from 2-0 down to draw with Parma on Sunday, lacked fluency in the absence of injured or rested players like Zlatan Ibrahimovic, Theo Hernandez, Simon Kjaer and Ismael Bennacer.

But the draw kept the Rossoneri top of the Serie A standings with 28 points and continued their unbeaten run in the league this season, although neighbours Inter Milan are just one point behind in second after beating Napoli.

Genoa moved above Torino into 18th place, but they remain three points adrift of safety.

The game was a slow burner until Destro pounced on a Gianluigi Donnarumma parry to tap in from close range and open the floodgates to a goal-filled second half.

Calabria drew Milan level with a superb diagonal strike from outside the area before Destro struck again when he rose to head in a cross and Kalulu came to Milan’s rescue seven minutes from time.

The 20-year-old’s first goal for the club saw Stefano Pioli’s side set a new record by scoring at least twice in 14 consecutive Serie A games, bettering the run of Torino in 1948.

Elsewhere, struggling Fiorentina earned a 1-1 draw at home to fifth-placed Sassuolo, while Bologna fought back from two goals down to draw 2-2 at Spezia.

Sampdoria won 2-1 at Hellas Verona and Parma played out a goalless draw with Cagliari.