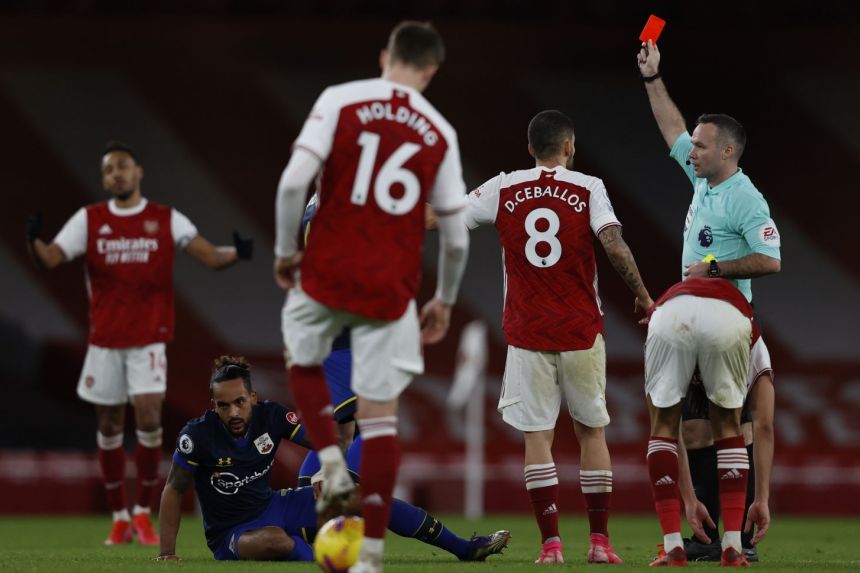 Arsenal piled more pressure on their Manager, Mikel Arteta with a 1-1 home draw against Southampton in the English Premier League (EPL) on Wednesday.

The result meant the Gunners stretched their winless league run to six games after having centre back Gabriel sent off.

Arsenal, who had lost their previous four home games, were left in 15th place on 14 points from 13 games, while Southampton moved one place up to third on 24 points.

Theo Walcott scored against his former club to fire the Saints ahead in the 18th minute with a dunked finish over Arsenal goalkeeper Bernd Leno after Che Adams released him through the middle.

Pierre-Emerick Aubameyang levelled in the 52nd minute with a clinical finish into the bottom left corner after good work by Bukhayo Saka and Eddie Nketiah and it seemed Arsenal had gained some momentum.

But they were on the back foot again after Gabriel was sent off for a second bookable foul.

This was when he hauled down Walcott in the 62nd minute and were fortunate not to fall behind when Nathan Redmond hit the woodwork from close range.

Southampton, who dominated throughout and kept the home side chasing shadows with crisp one-touch passing, survived a late scare in stoppage time.

This was after Arsenal defender Rob Holding headed against the crossbar.

AC Milan fight back again to salvage draw at Genoa