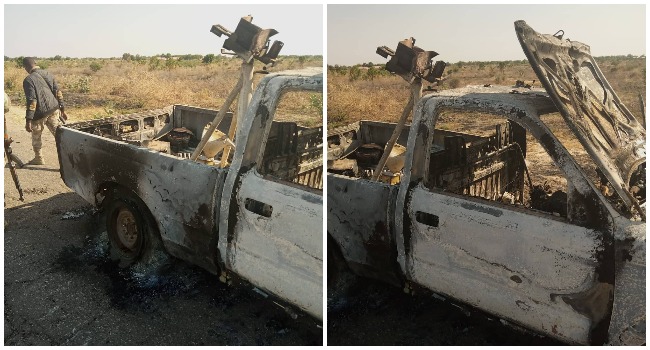 The military on Saturday said it has destroyed another Boko Haram terrorist’s training camp in Borno, along with a suspected ammunition depot. The operation was carried out by the Air Task Force of Operation Lafiya Dole at Nuwar in the Bama area of Borno State on January 14, according to a statement signed by spokesman Major-General John Enenche.

Some terrorists were also neutralised, the military said. “This was achieved . . . sequel to intelligence reports indicating that the cluster of huts and other structures in the settlement were being used to conduct combat training for the terrorists on a regular basis,” the statement said.

“The helicopters scored devastating hits in the target area which led to the neutralization of several BHTs as well as the destruction of some of their structures, including the terrorists’ armoury, where multiple mini-explosions were observed amidst the raging fire. Several other terrorists were taken out in follow-on attacks by the helicopter gunships.

“The Armed Forces of Nigeria, operating in concert with other security agencies and stakeholders, will sustain the offensive against the enemies of our Great Nation. We shall not relent until peace and normalcy are restored not only in the North East but also in every other troubled region of our beloved country.”

Meanwhile, troops of Operation Tura Takaibango in conjunction with the Air Task Force Operation Lafiya Dole, have destroyed seven Boko Haram/ISWAP terrorists’ gun trucks, according to another military spokesman, Brigadier-General Bernard Onyeuko. An unconfirmed number of the terrorists were also decimated, according to Onyeuko’s Saturday statement.

The terrorists met their waterloo when they attempted to attack the location of the troops at the outskirts of Marte in Marte Local Government Area of Borno State, the military said.

“The gallant troops, based on reliable information about the attack, had positioned themselves in an ambush site where they tactically withdrew to and awaited the arrival of the terrorists before they opened fire which led to the fierce battle that resulted in the successes recorded as indicated above,” the statement added.

“The troops are still engaged in the pursuit of the fleeing terrorists for further exploitation. Further details of interest to members of the public will be communicated later.”