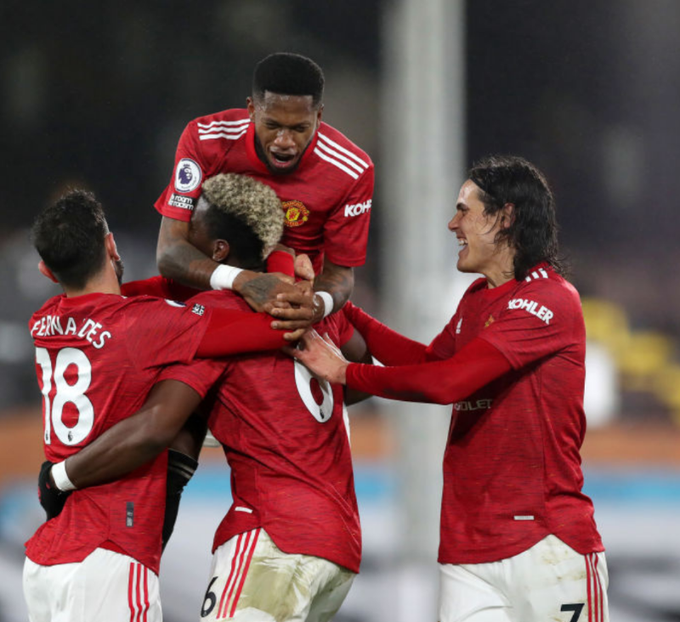 Paul Pogba produced a moment of magic as Manchester United came from behind to beat Fulham 2-1 and reclaim the Premier League lead on Wednesday, ending Manchester City’s short stay at the top.

Ole Gunnar Solskjaer’s in-form team started the match third in the table after 24 hours of chopping and changing at the summit.

The win sent the Red Devils two points clear and equalled the club record of 17 Premier League away games without defeat set by the treble-winning side of 1999.

United were forced to dig deep after Ademola Lookman punished them for an untidy start before Edinson Cavani pulled them level with a poacher’s goal later in the first half.

Pogba — back in the starting line-up in recent weeks after a spell on the periphery of Solskjaer’s team — put United in front with a stunning left-foot curling effort from outside the area in the second half.

United have now won seven Premier League games after going behind this season.

“Fantastic goal by Paul and we had some other chances to finish the game but of course when it is just one goal, and the players they put on, it is going to be like heart in your mouth,” Solskjaer told BT Sport.

But the Norwegian refused to be drawn on a title challenge, even though United are top at the halfway point of the season.

“It is always going to be talked about when you are halfway through and top of the league but we are not thinking about this,” he added. “We just have to go one game at a time. It is such an unpredictable season.”