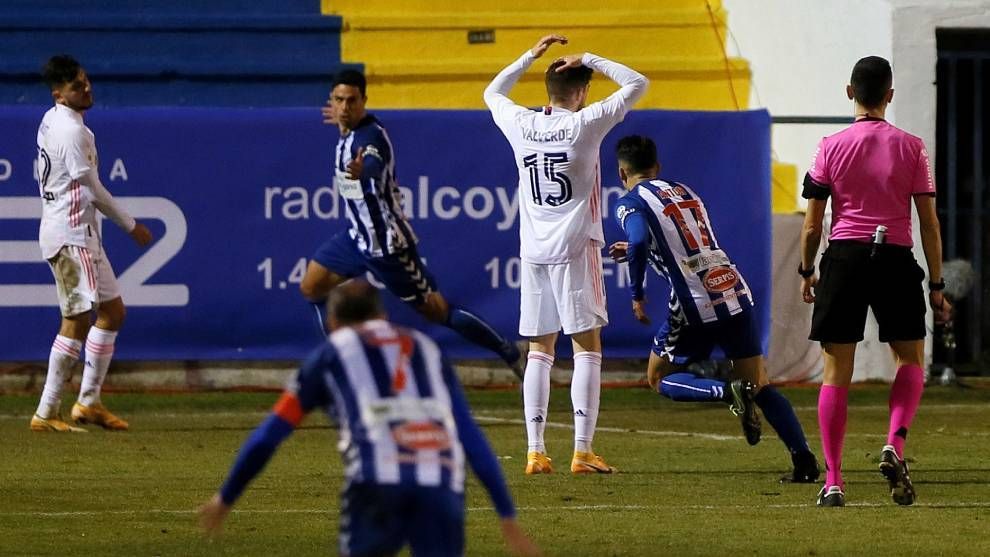 Real Madrid suffered an extraordinary defeat in the Copa del Rey on Wednesday as La Liga’s reigning champions lost 2-1 to Alcoyano, who play in Spain’s third tier and had a man sent off in extra-time.

Zinedine Zidane threw on the likes of Eden Hazard, Karim Benzema and Toni Kroos as substitutes, while Alcoyano’s Ramon Lopez was sent off in the 109th minute for a late challenge on Casemiro.

But against all the odds, Alcoyano still scored the winner, Juanan diverting in at the near post to pull off an incredible upset that continues a worrying dip in form for Madrid.

After a surprise loss to Athletic Bilbao in the Spanish Super Cup semifinal last week, Madrid have now responded with an embarrassing exit in the cup.

After one victory in their last five matches, this humiliation will bring a fresh wave of pressure on Zidane.

As expected, he rotated his starting line-up but a team that included the likes of Marcelo, Isco, Casemiro and Vinicius Junior should have had enough to beat an opponent sitting fourth in their division in Segunda B.

And when the first-choice stars were introduced in extra-time to put the game to bed, the opposite happened, as Alcoyano, with a man less, scored the winner on the counter-attack.

Alcoyano have not graced Spain’s top flight since 1951 and their El Collao stadium holds less than 5,000 spectators. The only shame here was their fans were not able to see it.

They were comfortable in the first period but Madrid scored with their first chance on the stroke of half-time as Marcelo’s delivery to the back post found a diving Eder Militao, who headed in.