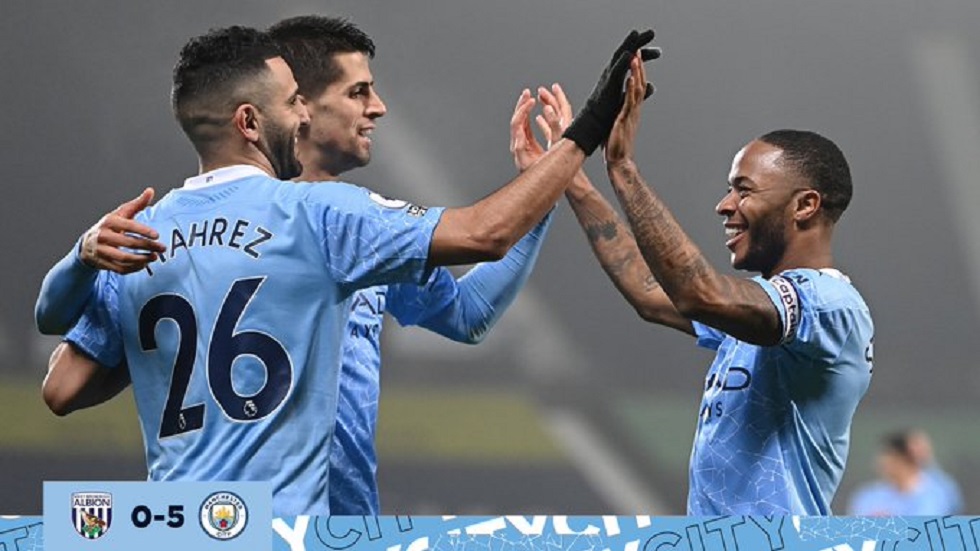 Manchester City thrashed West Brom 5-0 to move back top of the Premier League on Tuesday as Arsenal aided their push towards the European places with a 3-1 win at Southampton.

Pep Guardiola’s men have hit top form since and did not miss the presence of the injured Kevin De Bruyne in blowing away the Baggies by scoring four goals before halftime.

Ilkay Gundogan opened the floodgates by curling home from the edge of the box before Joao Cancelo’s controversial strike doubled City’s lead.

The West Brom defence was distracted by a wrongly raised offside flag before the Portuguese full-back found the net, but the goal stood after a VAR review.

Gundogan then took his tally to seven goals in his last eight league games before Riyad Mahrez and Raheem Sterling rounded off the scoring.

“There’s not really a secret,” Gundogan said of his scoring streak. “I’m just in the right spaces at the right moment. I’m in a bit more of an offensive role, if I get the chance close to the box I try to make the right decisions.”

West Brom have now conceded 17 goals in Sam Allardyce’s four home games in charge as they remain second bottom of the table, six points off safety.

Guardiola’s former assistant Mikel Arteta is also enjoying a fine run of form as Arsenal have taken 16 from the last possible 18 points.

The Gunners avenged their FA Cup to Southampton at the weekend despite falling behind after three minutes to Stuart Armstrong’s sweet strike.

Nicolas Pepe quickly levelled before Bukayo Saka rounded Alex McCarthy and slotted home to give the visitors at halftime lead.

“I think we were good from the start. We conceded a goal from a corner but responded straight away,” said Arteta.

“It showed a lot of intelligent and resilience from the team in the way they managed the game.”

Alexandre Lacazette sealed a vital three points 18 minutes from time as Arsenal moved up to eighth and within five points of the top four.