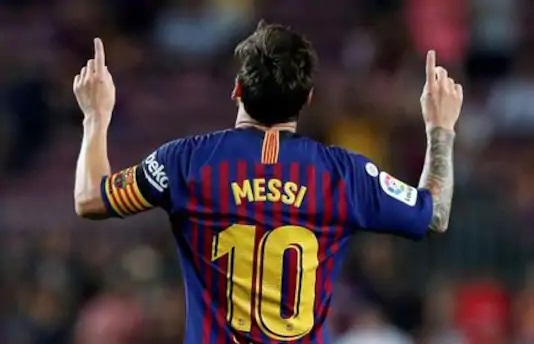 FC Barcelona moved a place up into second in the Spanish La Liga on Sunday after a 2-1 win over Athletic Bilbao, with club captain Lionel Messi entering the record books again.

Barca went ahead after 20 minutes, when Lionel Messi scored direct from a free-kick for his 650th goal in 750 games for the club.

Athletic Bilbao came back into it when Jordi Alba put past Marc-Andre ter Stegen after 49 minutes.

But FC Barcelona had the last word 16 minutes from time when Antoine Griezmann scored from Oscar Mingueza’s cross to give the home side all three points.

FC Barcelona are now ahead of third-placed Real Madrid on goal difference, with Atletico Madrid 10points clear at the summit.

At the end of the game, FC Barcelona coach Ronald Koeman defended Messi, following the publication by a newspaper in Spain details of his contract with the club on Sunday.

Koeman said: “What has come out is intended to damage him. Messi deserves respect.

“He has done so much for Spanish football. There are people out to hurt FC Barcelona and Messi.

“If it turns out to be someone on the inside then that is very bad and they should have no future at the club.”

FC Barcelona has denied any responsibility for the leak and said they could take legal action.