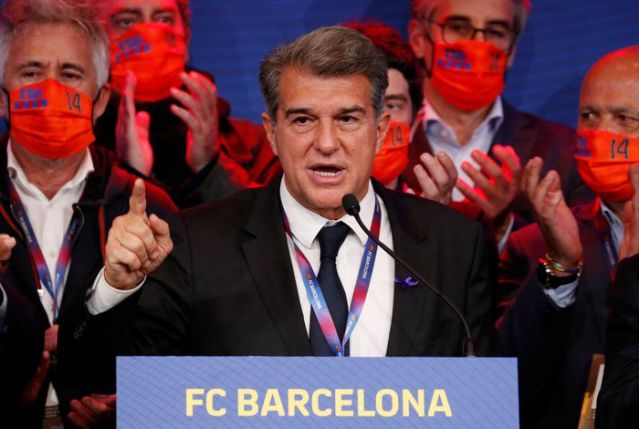 Joan Laporta was elected FC Barcelona president for a second time on Sunday as club members voted him in to replace Josep Maria Bartomeu.

The 58-year-old Laporta beat Victor Font and Toni Freixa to become the club’s president for a second time.

“Let’s go to Paris and see if we can turn it around,” said Laporta as he celebrated his victory at Camp Nou, referring to FC Barcelona’s UEFA Champions League last 16-second leg clash with Paris Saint-Germain (PSG) on Wednesday.

Bartomeu stepped down from the role in October 2020 as he faced a vote of no confidence from club members, with elections called for January.

But the elections were postponed because of the coronavirus pandemic.

Laporta inherits the club with gross debt of around 1.2 billion euros (1.4 billion dollars).

And this has come ahead of Lionel Messi’s contract expiring in the summer, meaning the star player can walk away for free.

The 33-year-old Messi voted in the election, along with teammates which included Sergio Busquets, Jordi Alba and Riqui Puig, while former president Bartomeu also voted to choose his successor.

Bartomeu was detained by police earlier this week as part of an investigation into the “Barcagate” social media scandal, relating to a company hired to monitor the club’s online presence.