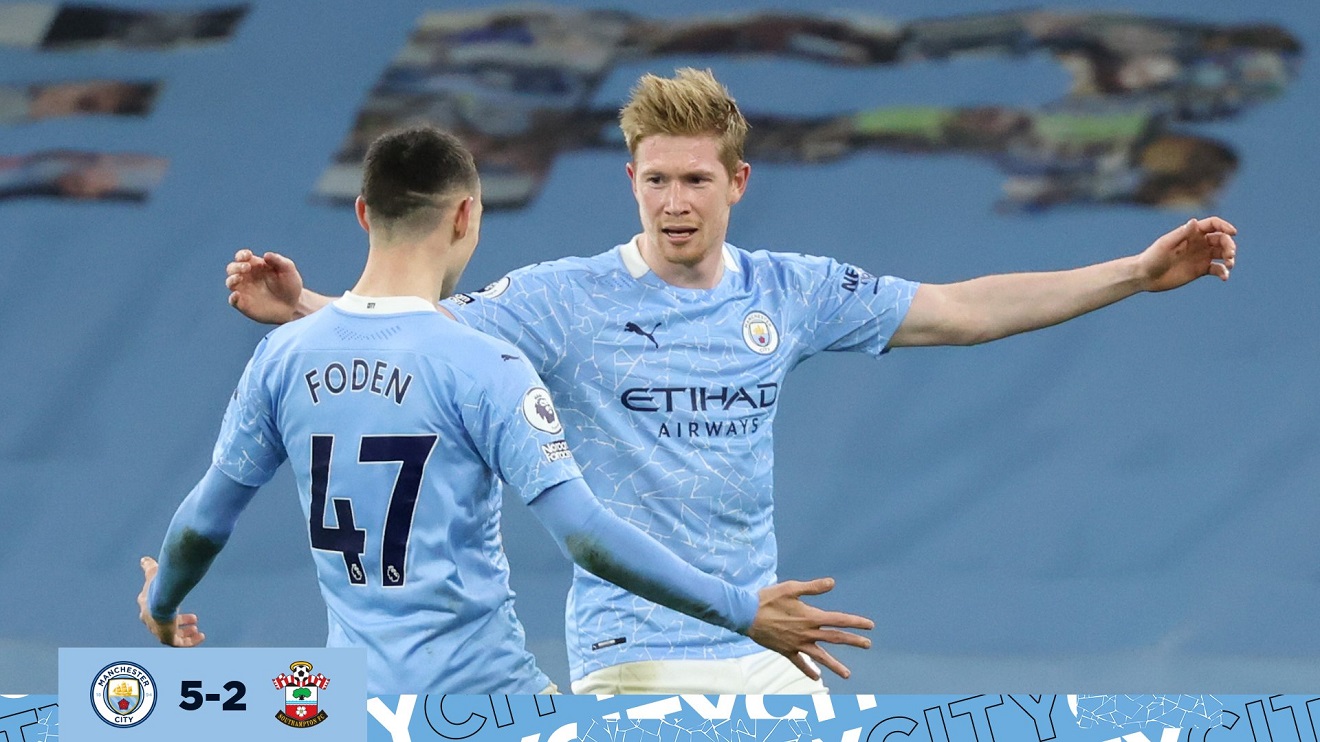 Leaders Manchester City showed that their weekend derby loss was a blip as Kevin de Bruyne and Riyad Mahrez both scored twice in a 5-2 win over Southampton in the Premier League on Wednesday.

City’s 21-match winning streak in all competitions was rudely interrupted by a 2-0 defeat by Manchester United but normal service was quickly resumed at the Etihad Stadium as they opened up a 14-point gap at the top.

After a slow start City went ahead with their first attack when De Bruyne pounced to convert a rebound in 15th minute, only for James Ward-Prowse to equalise from the penalty spot.

Mahrez restored City’s lead and Ilkay Gundogan made it 3-1 in first-half stoppage time before Mahrez produced another clinical finish 10 minutes after the interval.

Che Adams replied for an adventurous Southampton but De Bruyne grabbed his second of the night shortly afterwards as City looked like scoring every time they attacked.

City have 68 points from 29 games with Manchester United on 54 from one game fewer.

Southampton, who played impressive football at times, have 33 points from 28 games and are only seven points above the relegation zone after a ninth defeat in 11 games.

For a while it looked as though City might still be suffering a hangover from Sunday as Southampton dominated possession in the opening minutes.

But City went ahead when Phil Foden’s shot was parried out by Alex McCarthy to De Bruyne who scored off the crossbar.

City were fuming, with some justification, when McCarthy appeared to have tripped Foden after a poor touch but somehow got away without conceding a penalty after a VAR check.

“It is just incredible that penalty was not given. One day they are going to explain why. I do not understand it,” City manager Pep Guardiola, otherwise a happy man, said.

City responded to the injustice by going back ahead when Mahrez planted a shot past McCarthy and the Algerian was then denied another goal by the post only for Gundogan to turn in the rebound for his 10th league goal in 2021 and 12th of the campaign.

Mahrez was at the centre of City’s attacking onslaught and cleverly worked space on his left foot to make it 4-1 in the 55th minute. Adams then took advantage of a lapse in City’s defence to grab a goal back.

But no sooner did Southampton think they had a lifeline than De Bruyne showed great footwork to beat McCarthy again.

“I think we played quite well I must say even though we conceded five goals,” Southampton boss Ralph Hasenhuttl said.

“We were very brave with the ball at times. It’s the final quality that is missing.”