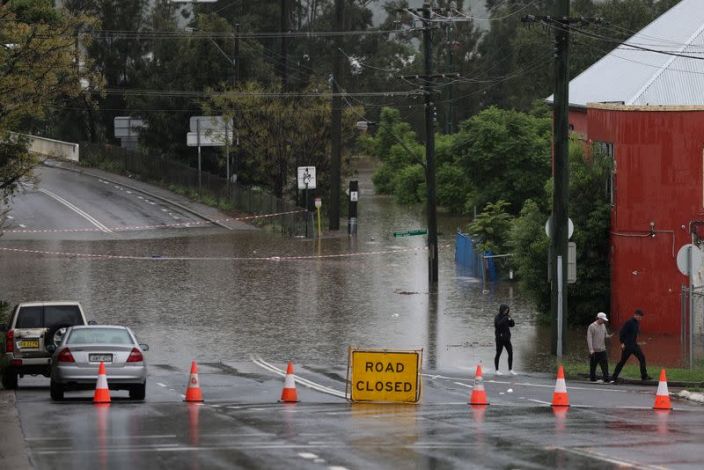 Thousands of people were evacuated from western Sydney and the Mid-North Coast of New South Wales as torrential rain continued to hammer the eastern Australian state on Monday.

There were 40 flood warnings and 20 evacuation orders in place on Monday morning, reports said.

The flooding runs from the Mid-North Coast down to the Illawarra region, some 600 kilometres south, including in western Sydney, and more is expected to be declared later in the day.

Thousands of people were evacuated from flooded areas and some 54,000 residents could be affected as the eastern state faced at least two more days of torrential rains, Federal Emergency Management Minister David Littleproud said on Monday.

“We are talking about recovery but we got another 24 to 48 hours to get through,” Littleproud told Channel 9’s Today programme.

New South Wales Premier Gladys Berejiklian said in total some 18,000 people have been evacuated from their homes, with about 15,000 on the Mid-North Coast, where some areas around Port Macquarie have seen almost 900 millimetres of rain in six days.

The other 3,000 evacuees were in western Sydney, around the Nepean and Hawkesbury river systems, Berejiklian told journalists.

He added that there were also concerns about the situation developing in the Illawarra and South Coast regions.

“I have never seen rainfall like this. I have worked in a number of floods and this is the biggest one I have worked in in my career,” NSW State Emergency Service (SES) Superintendent Shane Cribb earlier told national broadcaster ABC about the situation in Port Macquarie.

Heavy rain was likely to lead to flash flooding and was set to remain a serious risk for the Northern Rivers, in the state’s north-east, and Mid-North Coast on Monday and Tuesday, the Bureau of Meteorology warned.

Communities in the Mid-North Coast, currently the most critical area, were facing the worst flooding conditions since 1929.

Major flooding also affected Newcastle, some 140 north of Sydney, and the Nepean Valley west of the city, which was set to experience its worst flooding in 50 years as the Warragamba Dam – Sydney’s main water source – began spilling on Saturday afternoon causing flooding along the Hawkesbury and Nepean rivers.

Parts of Penrith, part of Greater Western Sydney, and other areas along the Nepean were ordered to evacuate on Sunday.

The districts of Hunter, between Sydney and Port Macquarie, and Central Tablelands, west of Sydney, also remained at risk.