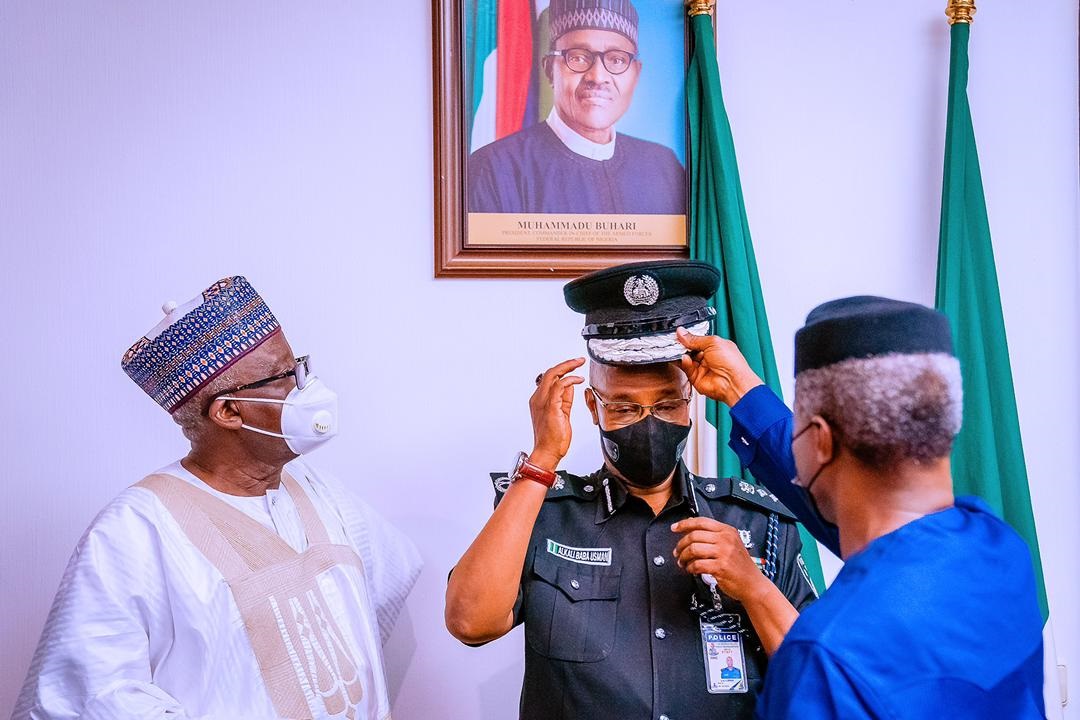 The decoration ceremony was held at Vice President Conference Hall at the State House in Abuja.

Those present at the event include the former IGP, Mohammed Adamu; the Secretary to the Government of the Federation (SGF), Boss Mustapha; the Minister of Police Affairs, Maigari Dingyadi, Senior Special Assistant to the President on Media and Publicity, Mallam Garba Shehu and his colleague in the office of the Vice President, Laolu Akande.

Alkali Baba in his speech vowed to restore the primacy of the Police.

He called on citizens and other residents to work with the Police towards restoring internal security in the country.

President Muhammadu Buhari had earlier on Tuesday approved the appointment of Usman Alkali Baba as the Acting Inspector-General of Police.

The Minister of Police Affairs, Maigari Dingyadi, who disclosed this to State House correspondents at the Presidential Villa, Abuja, said that the appointment was with immediate effect.

Congratulations to the new Acting Inspector General of the Nigerian Police Force, Usman Alkali Baba, who I had the honour of decorating earlier today.

The safety and protection of all Nigerians remains a priority of President @MBuhari‘s administration. pic.twitter.com/qKkiNLxazg

Until his appointment, Usman Alkali Baba was a Deputy Inspector-General, DIG of Police, and will be in acting capacity pending his confirmation by the Senate.

The newly appointed Acting Inspector General of Police born on the 1st of March 1963 and hails from Yobe State.

He bagged a Master’s Degree in public administration from the University of Maiduguri, Borno state in 1997 and a Bachelor of Arts from the Bayero Usman University, Kano in 1985.

As part of his policing vision, he aims to enhance police primacy in Nigeria through the provision of motivational and credible leadership, directed at stabilizing internal security and modernizing police operations, facilities and standards within the framework of citizens, consent, trust, and the rule of law.