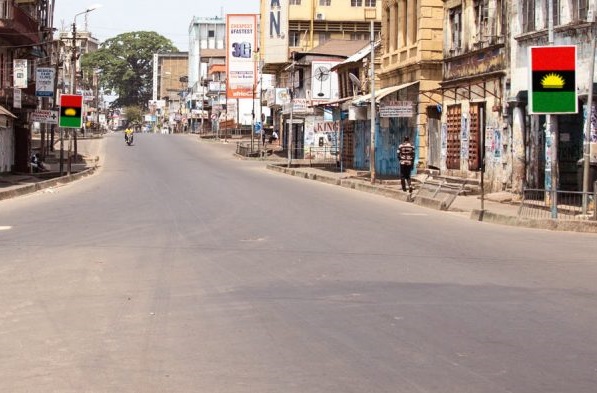 Social and Economic activities in Aba, the commercial hub of Abia was on Monday grounded to a halt following Independent People of Biafra (IPOB) sit-at-home order.

Only few persons who appear to have come out to check happenings in their environments were seen on the roads which had been taken over by youths playing football.

The pro-Biafra group led by Nnamdi Kanu had in a statement, ordered people from the South-east to sit at home between May 30 and May 31 for its annual Biafra Remembrance Day.

In the statement, Kanu said the day was set aside in to remember over 5 million Biafrans who died during the three-year civil war in esteem 1967 to 1970 in Nigeria.

It was reported that the central town district of Main Park, Industry Road, St Michael’s Road, and others were deserted on Monday.

The ever busy Osisioma junction which leads into the city of Aba was deserted.

Apostle Chidiebere, a Transpoter, told our reporter that he was staying away from work to heed the warning.

“It is also very important that we respect our fallen heroes by remembering their sacrifice during the war.

“We should also use this opportunity to let the world know through our disposition what befell our people during the Biafra-Nigeria war, and to discourage our governments from taking decisions and moves that could result to another war,” he said.

A community leader in Aba South LGA, Chief Ibewuchi Ndimele, said there was no going back on the peoples resolve to observe the order.

He said the order was a welcome development because it was made to honour people of Biafra that were brutally murdered for asking for their rights.

Ndimele urged the government to stop Igbo marginalization and give them a sense of belonging.