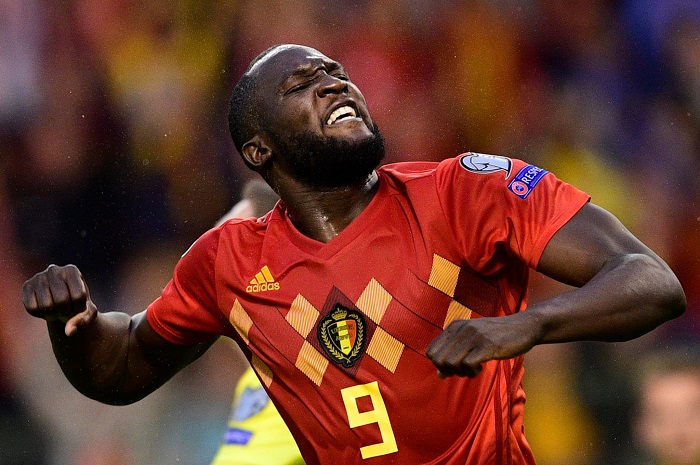 Romelu Lukaku’s double helped Belgium recover from an early setback in Tallinn as they saw off Estonia 5-2 to retain top spot in their World Cup qualifying group.

The Red Devils fell behind for the third time in four Group E matches.

That was when Mattias Kait fired the hosts —— ranked 110 in the world —— into a shock lead inside two minutes at A. Le Coq Arena.

But Belgium, in action for the first time since their Euro 2020 quarter-final loss to Italy, replied before the half-hour mark through a Hans Vanaken header and Lukaku’s clinical finish.

Lukaku doubled his tally early in the second half.

Further goals followed from Axel Witsel and substitute Thomas Foket as Roberto Martinez’s side made it three wins and a draw from their first four qualifying fixtures.

This was in spite of Erik Sorga netting a late consolation for Estonia.

Estonia had won their previous three matches and found themselves ahead early on.

This was when Kait turned over possession, carried the ball forward and rifled a shot away from Thibaut Courtois.

Belgium soon found their rhythm and were on level terms 20 minutes later thanks to Vanaken.

He added to the two goals scored in the 8-0 win over Belarus last time out in qualifying with a headed equaliser from five yards out.

Lukaku then profited from some poor home defending to fire Martinez’s men in front.

The prolific striker picked his spot after Karol Mets’ clearance hit team-mate Vladislav Kreida and fell into his path.

Alexis Saelemaekers went close to extending Belgium’s lead with a shot that crashed back off the frame of the goal.

But they did not have to wait much longer for their third as Lukaku worked a yard of space and curled the ball past Karl Hein.

Witsel tapped in from close range following some excellent work from Yannick Carrasco.

Carrasco also played a superb pass over the top for Foket —— introduced from the bench 10 minutes earlier —— to ghost in behind for Belgium’s fifth.

Another substitute in Sorga pulled one back for Estonia seven minutes from time, but Belgium were already home and dry by that point.