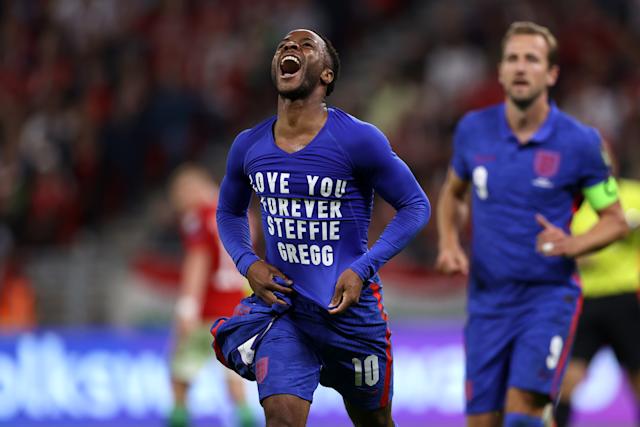 England brushed off their Euro 2020 final match heartbreak with a convincing victory in FIFA World Cup qualifier in Hungary as Raheem Sterling shone with a goal and an assist.

Just 53 days after the pain of losing on penalty kicks to Italy at Wembley, the Three Lions were back in action.

Their quest to qualify for the 2022 World Cup continued with a comfortable 4-0 victory in Budapest, where racist chanting was reportedly heard during the second half.

Sterling turned in the opener after the break before setting up Harry Kane, with Harry Maguire heading in soon after.

Declan Rice scored from distance to wrap up the win and maintain England’s perfect start to Group I.

Hungary had held both France and Germany to draws at the Puskas Arena during the European Championships and this always looked like England’s toughest test of qualification.

But they are now unbeaten in 14 games against Hungary and have not lost a World Cup qualifier since 2009.

This ground will be empty for the next two UEFA-organised matches.

This followed sanctions after racist and homophobic abuse marred Hungary’s Euro 2020 fixtures, with the third match of a stadium ban suspended.

With no away fans in attendance, the jeers that met England’s players taking the knee before kick-off in the now-familiar stance against racism and discrimination were deafening.

There was a report of monkey chants during the second half, with cups thrown at Sterling following the opening goal and a flare tossed on after Maguire’s effort.

It all surely mean that further sanctions await.