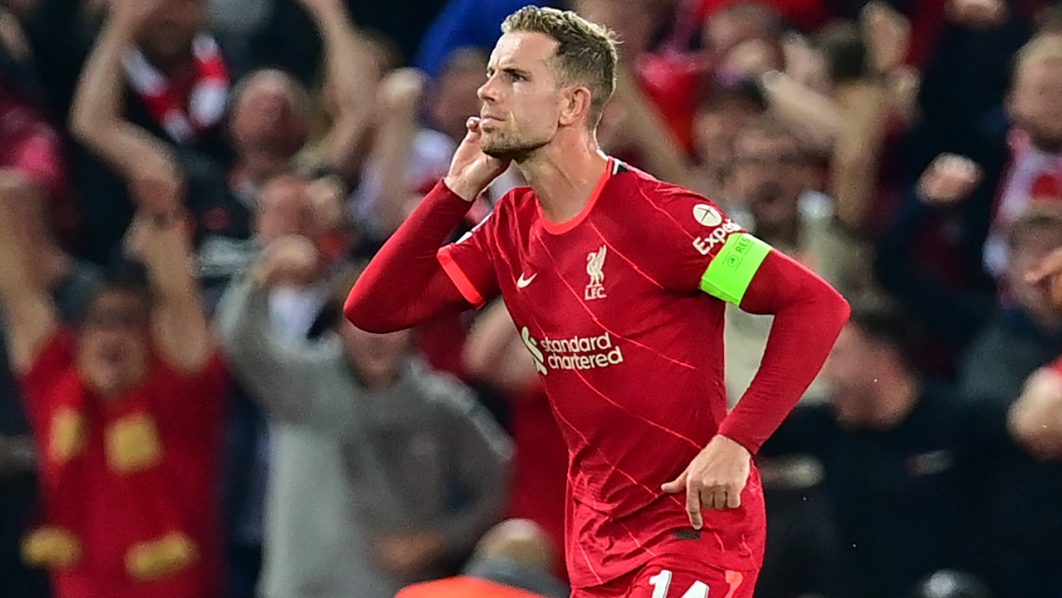 Liverpool captain Jordan Henderson struck a rare UEFA Champions League goal to earn his side a 3-2 victory over AC Milan at a rocking Anfield on Wednesday.

In the rip-roaring Group B match, Henderson rifled home in the 69th minute to settle an absorbing contest.

It was indeed a grand contest, between the two European heavyweights whose only two previous meetings had been in finals.

With Anfield welcoming back fans for a UEFA Champions League night for the first time in 18 months, Liverpool had threatened to run riot.

Fikayo Tomori’s own goal handed them an early lead in a barn-storming start.

Remarkably, after weathering the storm which included a Mohamed Salah penalty kick miss, AC Milan struck twice in quick succession at the end of the first half.

The duo of Ante Rebic and Brahim Diaz scored to silence the home crowd within three minutes.

AC Milan then had a goal disallowed shortly after the break before Salah made amends for his penalty kick miss by equalising from close range in the 49th minute.

The outcome was still in doubt until Henderson capped a memorable Anfield night with a thumping effort —- only his second in the competition and first for seven years.

“For half an hour we blew them away,” Liverpool left-back Andy Robertson said.

“Then we got sloppy and stopped doing the things we were doing really well. We let them back into the game.

”We had to walk in at half-time thinking ‘how have we let this happen?’”

AC Milan’s return to Europe’s top club competition for the first time in seven years began in torrid fashion as the seven-time champions were initially overwhelmed.

With Zlatan Ibrahimovic unavailable and several players making their UEFA Champions League debut, AC Milan looked ill-equipped to compete and fell behind in the ninth minute.

This was when Trent Alexander-Arnold got in on the right side of the area and his cross struck former Chelsea player Tomori and beat AC Milan goalkeeper Mike Maignan.

Before AC Milan could clear their heads they conceded a penalty kick, when Ismael Bennacer blocked Robertson’s shot with his arm.

But Maignan dived to his right to keep out Salah’s penalty kick.

It was only the second time in 19 attempts that Salah had failed to convert a penalty kick and it proved a turning point.

Salah fired over and Joel Matip headed straight at Maignan as the chances kept coming.

But Liverpool were rocked on their heels as AC Milan turned the game on its head.

Liverpool manager Klopp said later that his team had got a bit “carried away”.

For the first time Liverpool’s high press relented, and AC Milan worked the ball neatly forward before Franck Kessie’s pass played in Rebic to sweep a low shot past Alisson.

Klopp wore a wry smile after that, but one minute and 48 seconds later he looked as stunned as everyone else.

AC Milan attacked down the left again with Kessie and Rebic combining to set up Alexis Saelemaekers.

His shot was blocked on the line by Robertson, only for Diaz to pounce and convert.

It could have got even worse for Liverpool a minute after the restart when Saelemaekers scored from close range following a corner-kick but an offside flag spared Liverpool.

The frantic pace continued and Liverpool were level in the 48th minute.

This was after Divock Origi, given his first action of the season, scooped a ball over AC Milan’s defence for Salah to dink a bouncing ball past Maignan.

AC Milan did well to soak up Liverpool pressure but they finally cracked when a corner-kick was cleared to the edge of the area and Henderson smashed the ball home.

It will take time for MNM attacking trio to shine, PSG coach says

COVID-19 quarantine absconder turns herself in to New Zealand police