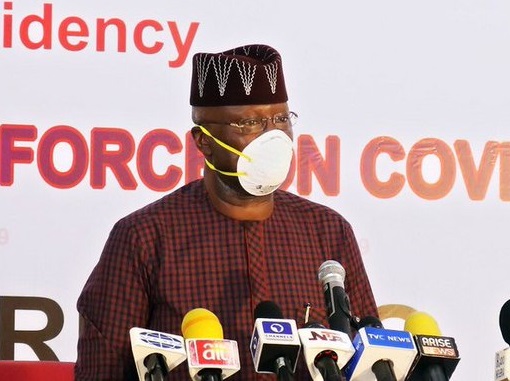 The Federal Government has restated its commitment to restore payments to pensioners on its priority list as well as clearing the backlog of arrears inherited from previous administrations, under both the contributory and defined benefit pension schemes.

Mr Boss Mustapha, Secretary to the Government of the Federation, disclosed this at a two-day sensitisation summit on, ”Eradication of Pension Fraud” in Nigeria.

The programme was organised by the Economic and Financial Crime Commission (EFCC), in collaboration with the National Pension Commission (PenCom) and other stakeholders in the industry.

Mustapha said that the theme of the workshop spoke to the sacred responsibility of safeguarding the wellbeing of the senior citizens, who had worked.

“I am glad to know that the EFCC is extending its specialised coverage to the Nigeria pension industry, in order to secure the pension funds and shield unsuspecting retirees and contributors from the activities of fraudsters.”

“The government is conscious of its responsibilities with regards to the payment to eligible retirees in the public sector; for this reason, we are resolute in dealing with the criminal act of pension fraud, its manifestation and those resulting from human interface.

“It is unfair for such crimes to be perpetrated against innocent pensioners by robbing them of the legitimate earnings they worked so hard to save for their retirement,” he said.

Mustapha commended President Muhammadu Buhari’s commitment and success in pension matters, especially his attention to the payrolls of 9,216 pensioners of NITEL, after more than a decade of neglect.

He also said that other matters were the recovered cash and non-cash assets totalling N16 billion, trapped in various insurance companies.

”Also, the underwriters managing the pension funds of federal parastatals and universities, through the Pension Transitional Arrangement Directorate.”

”The release of N54 billion to settle outstanding 33 per cent arrears, which dated back to 2010 when the minimum wage was increased to N18,000, placed 3,542 pensioners of the 2005 liquidated Delta Steel Company on the payroll, among other achievements”, he said.

The EFCC Executive Chairman, Mr Abdulrasheed Bawa, said that the initiative of the summit was significant to take stock of the measures put in place to improve and sanitize pension administration in the country.

Bawa said: “We cannot say exactly how much is lost to pensions fraud in financial terms, bearing in mind that most cases are unreported or underreported, but we have investigated and documented hundreds of billions of naira lost in the pension industry”.

He said that the EFCC had the mandate to coordinate the enforcement of all economic and financial crimes laws in the country, which had made the commission conversant with the rot in the pension system.

“I am extremely optimistic that the reforms in pension administration and fraud prevention that will be the natural outcome of this summit, will be urgently implemented by all stakeholders for the instant and sustainable benefits of all,” he said.

Hajiya Aisha Dahir-Umar, Director-General of PenCom, said they where pleased to partner with the EFCC in the awareness creation initiative, which essentially sought to examine the incidences of fraud and ways to eradicate the menace in a proactively.

Dahir-Umar, represented by the Commissioner, Inspectorate, Mr Clement Akintola, said that the event would create the synergy needed to boost the efforts of the two organisations in discharging their respective statutory mandates as they related to the theme of the summit.

“As you may recall, the problems of fraud and mismanagement in the pension sector are amongst the reasons that necessitated the pension reforms of 2004 by the Federal Government, the Pension Reform Act (PRA) 2004, which was later reviewed and re-enacted in 2014.”

“These legal and institutional frameworks aim at addressing the rot that characterise the administration of pensions in the pre-reform era, the Act also established PenCom to regulate and supervise all pension matters in Nigeria, including the licensing of PFAs and Pension Fund Custodians.”

“The Pension Transitional Arrangements Directorate was also established by the PRA 2014 to administer, in a transparent manner, the Defined Benefits Scheme (DBS) for pensioners exempted from the Contributory Pension Scheme,” Dahir-Umar said.

She said that those measures substantially restored credibility and confidence in Nigeria’s pension systems, pointing out that the PRA 2014 had also strengthened Nigeria’s pension institutions in the contributory, DBS and imbued them with the capacity to rise above emerging challenges.

The PenCom chief executive added that the continued collaboration with the EFCC would certainly serve as a catalyst for reducing the menace of fraud in the pension industry to the barest minimum.