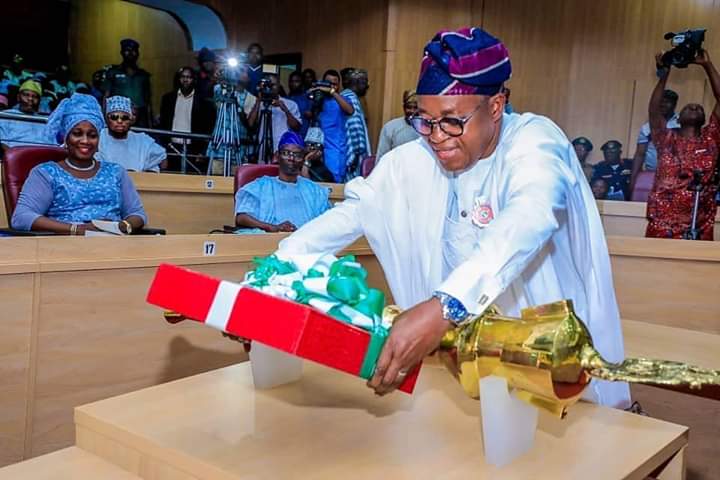 Gov. Gboyega Oyetola of Osun, on Tuesday, presented a N129.7 billion appropriation bill to the state house of assembly for the 2022 fiscal year, with the education sector gulping the highest proposed allocation of N26.6 billion.

Infrastructure took a distant second with N19 billion, N16 billion went to the Health sector, while about N7 billion was earmarked for the Agriculture sector, in the proposed budget, which had been christened: “Budget of Sustainable Development”, with a N20 billion increase over the 2021 budget of N109.8bn.

Presenting the budget before the lawmakers in Osogbo, governor Oyetola said that the budget aimed to further cement and pursue the administration’s policy thrust that was shaped by the prevailing economic realities.

He cited aggressive improvement in the Internally Generated Revenue drive of the state, to ensure optimum performance in the coming years, as the main focus of the budget.

Oyetola said workable strategies had been put in place to boost the State’s revenue, without putting unnecessary burden on the residents.

Oyetola, who disclosed that all the general hospitals across the state are to be rehabilitated, added that government would also embark on massive construction of more roads in 2022.

“In line with our administration’s commitment to ensuring that there are no abandoned projects in the State, all existing on-going road projects are being worked upon and will be delivered soon.

“I want assure the people of Osun that more notable road projects would be awarded as part of government’s efforts to improve the socio-economic activities of the state’s residents.

“In a broader view, therefore, the central focus of our administration is to make Osun a prosperous state in a secure and sustainable environment, through pragmatic, transparent, accountable and inclusive governance.

“All these are designed to aid Ease of doing Business, facilitate easy and smooth movement of citizens and help in the transportation of farm produce to urban markets,” the governor said.

Oyetola also said that his administration would focus on tourism, to re-energise the state’s economy.

“Another innovation of our administration is the conscious use of arts and culture to re-energise our state economy.

We have not relented in the promotion of our cultural activities in the State.

“Although we may not be where we are supposed to be, we are certainly making steady progress in our efforts to make our Tourism sector a money spinner for the state.

“For instance, we have progressed from generating cumulatively less than N 2 million in the past three years, 2017, 2018 and 2019, to generating more than N20 million in 2020 alone and so far made N10 million in 2021. We are determined to make it better in the coming years,” Oyetola added.

Earlier, the Speaker of the Assembly, Mr Timothy Owoeye, commended the governor for prioritising accountability, probity and prudence in the management of the scarce resources accruable to the state.

Owoeye promised that the legislature would display the commitment needed to ensure speedy passage of the budget, as it had been doing in the past years.

“We will continue to play a supportive role to the executive arm, to continuously improve the lives of the citizens.

“I wish to commend Gov. Oyetola and everyone who took part in the implementation of the 2021 budget for the wonderful job.

“With a 9 per cent performance in 2020 and 77 per cent as at the second quarter of 2021, our performance has greatly increased our standing in the comity of states and also makes us an investment destination for local and foreign investors,” the speaker said.