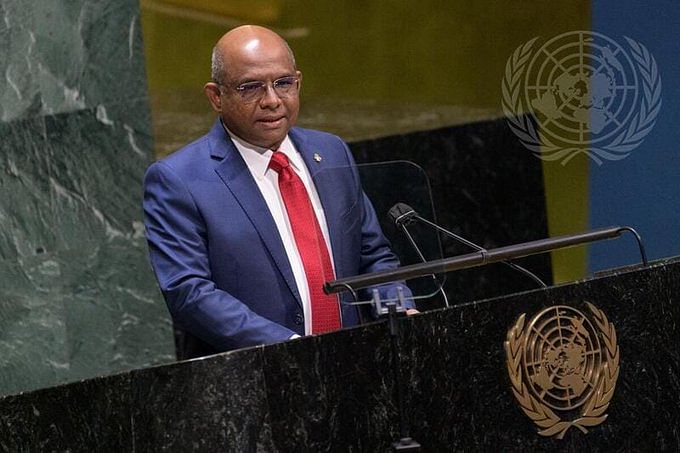 The President of the 76th session of the UN General Assembly, Abdulla Shahid has arrived in Maldives for his first official visit to his country since he assumed duty as the General Assembly President.

Ms Monica Grayley, spokesperson for the President of the General Assembly (PGA), stated this at a news conference, on Wednesday, at the UN headquarters in New York.

Our UN Correspondent reports that Shahid from the Maldives, was inaugurated on Sept. 14, after a handing over by the President of the 75th session, Volkan Bozkir.

Grayley said Shahid had met with the President of the Maldives, Ibrahim Mohamed Solih, where he spoke about his “Presidency of Hope”, while noting that the Maldives was one of the most vulnerable countries in the world.

“The country is one of the most vulnerable to environmental disasters, climate change, economic shock, supply chain disruptions and other factors, but even when confronted with challenges.

“Maldivians never give up hope and keep working for a better tomorrow,”Grayley quoted Shahid as saying.

In addition, the spokesperson said Shahid met with other authorities, including the Vice President and the Chief Justice of Maldives.

“They discussed ways of strengthening the voice of Small Island Developing States on topics, such as climate adaptation and financing ahead of COP-26.

“The PGA also held a conversation with approximately 70 students in Male, the capital city of Maldives and listened to their concerns on climate change.

“Shahid promised to take their suggestions on climate actions to international leaders during his High-Level Meeting on the subject on October 26.’’

“He will continue conversations on the substantive and practical aspects of the work of the Assembly in line with General Assembly resolution 72/313.

“Shahid will call them the “Holhuashi Dialogues”, a tradition from the Maldives, which consists of a meeting space open to the entire island; a place for discussions, ideas and interactions about issues that are important for the community.

“These meetings, here in New York, will be held under Chatham House rules, and in the interest of transparency, an informal summary will be shared with Member States.

“The first “Holhuashi Dialogues” will be on Climate Change and Humanitarian Situations”, Grayley said.

Similarly, she added that the PGA would convene a High-Level meeting on Delivering Climate Action: for People, for Planet and for Prosperity” on Oct. 26.

“The meeting will focus on the gap between current and required technical and financial capacities to achieve the 1.5-degree Celsius target and how that gap can be met through showcasing best practices.

“The High-Level meeting will also take stock of the ambition-raising initiatives from Member States and stakeholders,’’ she said.

NAN reports that the UNGA president, had at his inauguration, stated that he would be focusing on gender equality, youth empowerment, climate change and equitable access to vaccines, in his one year presidency.

Shahid said he would bring his experience as foreign minister in the Maldives to bear on the presidency as he began with a gender balanced cabinet.