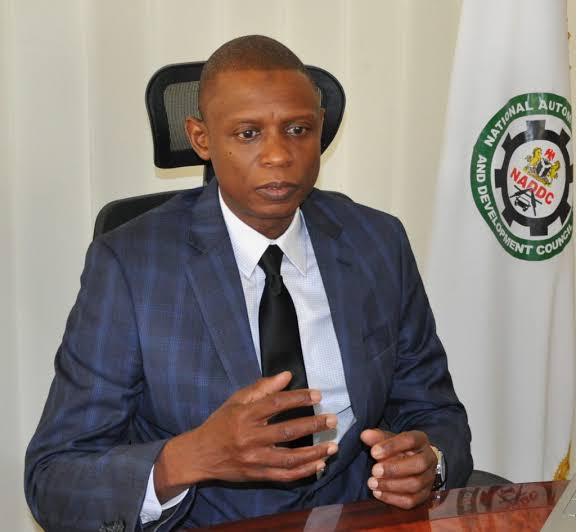 The Nigeria Automobile Design Development Council (NADDC) on Tuesday, presented electronic vehicle produced by the council to the Federal Government.

The Director-General of the council, Mr Jelani Aliyu presented the vehicle to Chief Sharon Ikeazor, Minister of State, Environment, in Abuja.

Aliyu said that the council had also created employment opportunities to over 50,000 youths in the country.

He said that the aim of producing the vehicle was to support local vehicle and discourage importation of vehicles built in abroad.

According to him, Nigeria is truly blessed, when the world was looking for oil we had it and now that the world is looking for cleaner gas we have it.

“There is a lot happening, a lot of people are getting employed approximately 50,000 Nigerians are employed directly or indirectly in the automotive sector.”

“We have trained over 20,000 youths across the country, we have in the six geo political zone on automobile system. We are trying to get more Nigerians employed.”

“We develop solar electric charging station, the first one was commissioned in Sokoto and Lagos and we decided to put them in university,” he said.

According to him, this is to help get young Nigerians to be part of the programme and understand this technology and come up with better solution.

“We are honoured to have this opportunity to give you an overview of what our agency does, especially in respect to the COP 26, coming in November, in Glasgow.”

“In the 70’s Nigeria knew nothing about Tokunbo vehicles because all the vehicles and their parts used then were all produced, in Kaduna and Jos.”

“In 1986, the crude oil we were depending on crashed which made half Nigerians poor,” he said.

Aliyu explained that investment production, structural, infrastructure development, standard, skills and market development were five keys elements the agency was looking at to bring back production in the country.

“When you bring in fully built car you have imported money out of Nigeria, empowered youths out of Nigeria and there by making Nigeria youth unemployed.”

“As a result of that effort, close to half a trillion naira is being invested by credible Nigerians company such as Profunds, Dangote and Innoson.”

“The companies have been able to produce up to 4,000 vehicles in a year.”

“We are also promoting electric vehicle and Auto gas vehicles. Our stakeholders are key to support our programmes,” he said.

The director-general said that ”the agency tests, evaluates and monitors vehicle parts as the effort would reduce chance of producing fake vehicle parts.”

He added that the agency had currently built three branches, in Zaria, Enugu and Lagos States, where the vehicles would be testing properly.

Responding, Ikeazor said that the partnership by the agency would help to achieve the Nationally Determined Contributions (NDCs) of Paris Agreement.

“You partnering with the ministry and coming up with the electric vehicle, will help to reducing our emission by 20 percent unconditionally and reducing by 47 percent with the help from international donor partner’s.”

“We reaffirm our commitment to the Paris agreement.”

“At the same time, the COP 26, at Glasgow is to discuss other issues surrounding the Paris agreement as its affects Nigeria not only Nigeria but Africa.”

“One of those issues is the issue of gas. Gas is part of our transition and development, we have to come up with the gas expansion programme.”

“I am also impressed that the council’s priority is creating employment for the youths, which is also one of the government’s target, she said.
The minister who tested the vehicle around the ministry’s premises, said that it was smooth, soundless, adding that testing the vehicle was an awesome experience.”

“The vehicle has no smoke which is the key thing, it will help to reduce emissions, if we start using the vehicle in the country,” she said