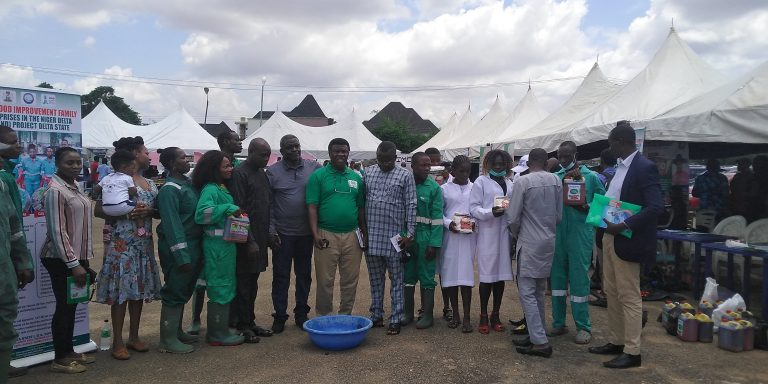 Mr Collins Ashoro, Delta State Coordinator (SPC), Livelihood Improvement Family Enterprise Project for Niger Delta (LIFE-ND), has said that the project had the capacity to bridge the food gaps in the country.

Ashoro stated this in an interview with our correspondent at an event to mark this year’s World Food Day celebration in Asaba, on Monday.

He said that LIFE-ND, an IFAD-assisted project, was the initiative of the Federal Government, in partnership with the Niger Delta Development Commission (NDDC), International Fund for Agriculture (IFAD) and the state government.

The SPC said that the target of the project in Delta was to impact 4,250 beneficiaries, aged between 18 and 35 years in 100 communities, across 10 Local Government Areas of the state.

He added that the project was designed to train and equip youths and women, within the specified age bracket, to master agribusiness as a means to produce food, create jobs and wealth, for the teeming unemployed youths of the region.

Based on the way the programme was being implemented, it was capable of addressing the food needs of the region and, by implication, the country at large, Ashoro said.

He said that they were at the World Food Day celebration to showcase some of the products from the project, as well as to create the needed awareness to attract youths into agriculture.

Ashoro noted that today’s youths were on a fast track to make money, adding that agriculture, however, demands patience as it follows a natural course that only those who waited would surely reap a good reward.

He lauded Gov. Ifeanyi Okowa for the prompt payment of the state’s counterpart funds to the project, saying that with such commitment, the project had enjoyed good patronage and was thriving well.

To achieve its goals, the project adopted the Incubation Model: incubators are persons who are into agricultural production in the four thematic areas; oil palm, cassava, fisheries and poultry.

“LIFE-ND adopted the Incubation Model; similar to Master and Apprentice, where the incubatees are the Apprentice (beneficiaries) while the Incubators are the Master (Trainers).”

“The Incubatees originate from the communities where Incubators have been selected.”

”The Incubatees will undergo a mentorship training for two product cycles and upon successful graduation they would be established.”

“The priority commodities for Delta are cassava, oil palm, poultry and fisheries, to be covered by the full complement of the production, processing and marketing value chain,” he said.

He said that although the project’s target was to engage 4,250 incubatees and 100 incubators, it had so far engaged 315 incubatees in 57 incubators across the communities and the LGAs.

Ashoro described the theme of this year’s World Food Day: ”Our Actions are Our Future: Better Production, Better Nutrition, a Better Environment and a Better Life” as apt.

“The states and the nation are supposed to take this theme into consideration because it is what you do today that the future will look like.”

“And in agriculture, if you do not sow well today, eventually you won’t reap what is expected. So LIFE -ND has come to ensure improved productivity and to help educate these young ones on the good practices of agricultural production in the state”.

He said that each beneficiary would be provided with working capital, through a revolving loan and based on the type of enterprise, to enable them get training at the incubation centres and to set up their own enterprises at the end of the training.

Ashoro attributed the rising cost of food to the costs of inputs and the external forces such as foreign exchange.

He, however, said that working in clusters could help the incubatees to reduce costs of production by pooling resources together and achieving production at reduced costs.

“Yes, with the intervention of LIFE-ND, to a large extent, we can reduce food prices and bridge the food gap in the country.”

“As we speak, each of the youth fish farmers and beneficiary of LIFE-ND is entitled to 1,500 juveniles and each incubator has about five incubatees attached to the centre.”

”So, by implication the five incubatees will be having 7,500 juvenile fishes to raise to table size and as we speak we have more than 10 incubation centres that are into fish production, the multiplier effect will marvel you.”

“So, for poultry, oil palm and cassava, all the increase will be added into the nation’s food production.”

“My message to the populace is that we can’t run always from the fact that food is key to survival, if you eat quality food there would be no need to visit the hospital.”

“Youths must be encouraged to go into agriculture which is the only way to go now,” Ashoro said.

Entrepreneurship is key in addressing unemployment in Nigeria – Expert