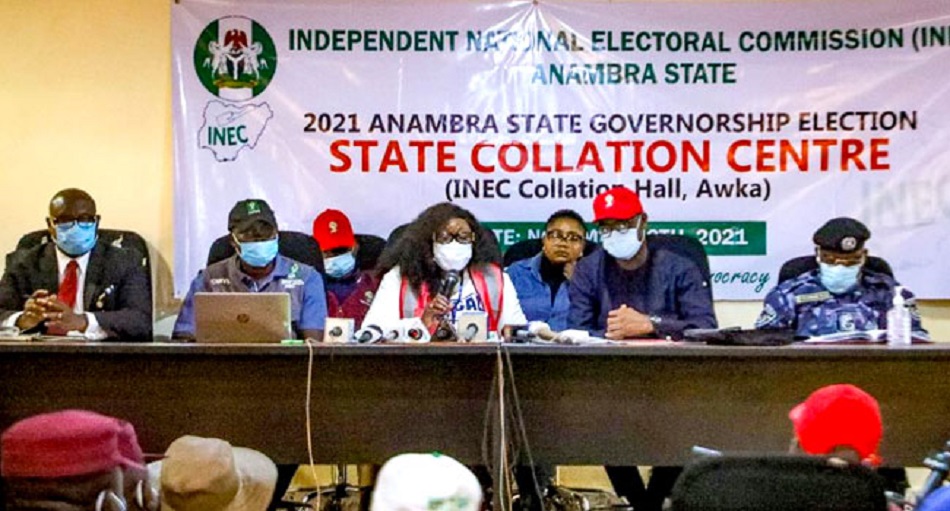 The Independent National Electoral Commission (INEC) on Monday suspended the collation of results for the Anambra State governorship election.

INEC’s Chief Returning Officer for the election, Professor Florence Obi, announced this in the early hours of the day at the commission’s head office in Awka.

Party agents, reporters, and observers among others had waited until about 12:15am for the declaration of a winner before events took a different turn as a result of Professor Obi’s announcement.

“We have collated results from 20 out of 21 local government areas,” said the chief returning officer who doubles as the Vice-Chancellor of the University of Calabar in Cross River State.

Rather than declaring the winner of the election after announcing the total votes scored by the participating parties, Professor Obi said a declaration would only be made after a supplementary election was conducted in the remaining local government – Ihiala.

She added, “The outstanding results are for Ihiala Local Government Area where for various reasons, the commission could not deploy materials yesterday (Saturday).

“Consequently, based on Constitutional considerations and provisions of the Electoral Act, as well as revised regulations and guidelines for the conduct of election issued by the commission, a supplementary election is indicated for Ihiala Local Government Area.”

She, therefore, announced that a supplementary election would be conducted in the 326 polling units across Ihiala on Tuesday, November 9.

Ihiala is the only one of Anambra’s 21 LGAs where elections could not hold.

“Clause 47 of the Revised Regulations and Guidelines for the conduct of elections provides that supplementary elections shall be conducted where the commission due to logistic challenges is unable to deploy on Election Day,” Professor Obi said.

“Given the foregoing, it becomes imperative to bring Ihiala Local Government Area at par with the other 20 local government areas in this election before we can make a valid declaration in this election or take any further action based on the extant laws.

“Therefore, I, Professor Florence Banku Obi, in my capacity as Returning Officer for this election, hereby announce the suspension of the process of collation of results and declaration of a winner until a supplementary election is held in the 326 polling units in Ihiala Local Government Area of the state.

“I have conferred with the commission, being the body that fixes the date for the election, and the commission has decided that the supplementary election will take place on Tuesday, 9th November 2021. Therefore, the collation of results shall resume thereafter.”

She appealed to party agents and the people of the state to support INEC during the supplementary election to ensure that the election “is brought to a satisfactory conclusion, for the good of the people of Anambra State, the people of Nigeria, and to the Glory of God”.

Results were announced for all other LGAs with the candidate of the All Progressives Grand Alliance, Charles Soludo, winning in 18 of the 20 LGAs for which results were declared.

But the candidate of the All Progressives Congress (APC), Senator Andy Uba, was unable to win any local government in the election.

Anambra: Supporters troop to Soludo’s residence ahead of election result