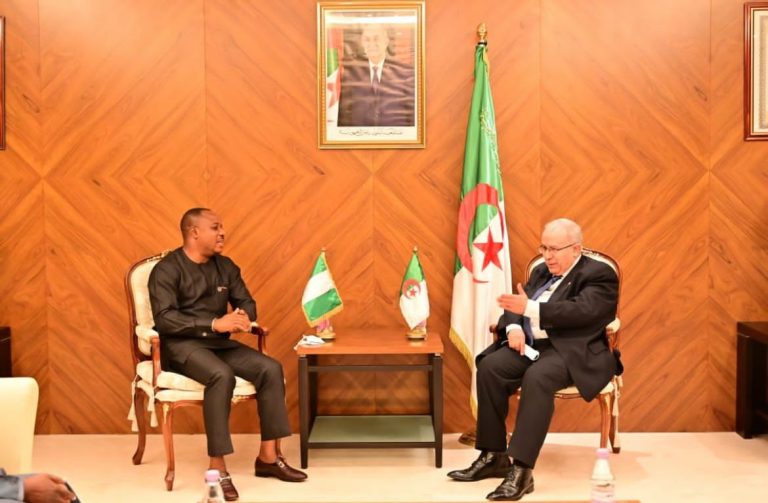 Nigeria and Algeria have reiterated commitment to working closely to deepen diplomatic relations between them.

This is contained in a statement by Embassy of Nigeria in Algiers, on Thursday in Abuja.

According to the statement, the commitment is against the backdrop of official meeting between Amb. Gabriel Aduda, Permanent Secretary, Ministry of Foreign Affairs with Ministers of Foreign Affairs and Transport of Algiers, respectively.

“In continuation of his official visit to Algeria for the 3rd Session of Bilateral Consultations, Aduda met Mr Ramtane Lamamra, Minister of Foreign Affairs of Algeria.”

“He also met Mr Bekai Aissa, Minister of Transport of Algeria, to discuss bilateral relations between the two countries.”

“Aduda was received by Lamamra in his office on Dec. 7, 2021 and the two officials hailed the level of bilateral relations and agreed to work to deepen it even further.”

“Both sides identified the importance of intra-African economic integration, including transport connectivity, as key to achieving full regional integration”, it said.

The statement said that In his meeting with Aissa, on Dec. 8, Aduda highlighted the importance of direct air links between Nigeria and Algeria, as well as road and rail links between the two countries.

”These will improve people-to-people contact and increase business relations among citizens of the two countries,” the statement said.

It further quoted Aissa to reiterate Algeria’s commitment to undertaking direct flights to Nigeria, under the framework of Bilateral Air Services Agreement.

It stated that in line with the agreement that was signed in 2018, both sides agreed to discuss the issues in greater detail at a technical level.

The statement, however, said that the Aduda was accompanied to the meetings by the Ambassador of Nigeria to Algeria, Mr. Mohammed Mabdul, and some other officials.

Use of common seal by companies no longer mandatory – CAC boss