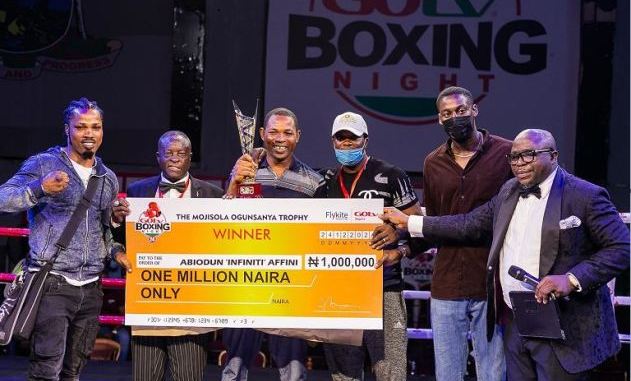 Abiodun “Infiniti” Afinni, on Sunday expressed appreciation to organisers of the just concluded GOtv Boxing Night 24 as he emerged winner of the Boxer of the Night Award.

He won ₦1 million for his efforts in a spectacular performance to win the national cruiserweight championship after defeating Micheal “Emirate” Godwin by a split decision.

His performance at the show, which held at Teslim Balogun Stadium, Lagos, also won him the Mojisola Ogunsanya Memorial Trophy.

Afinni won a little more than the title and cash prize. His defeat of Godwin was a revenge for his own defeat in the hands of the same opponent at GOtv Boxing Night 23.

Afinni told our correspondent that he was not expecting to emerge the winner of the award and was very happy about his award.

He said that the boxing event lived up to expectations and he was well prepared to avenge his defeat.

“I am very happy to finally win this award, it is indeed a great moral booster for me and my coaching team.”

“I appreciate the organisers and I’m looking forward to better days ahead,” Afinni said.

In the third title fight on the night, Segun “Success” Olanrewaju, made light work of David “Awosika” Cosmos, by knocking him out in the second round of their national lightweight title bout.

In the welterweight division, Segun “War Adeyemi” knocked out William “Kaki” Amosun in the first round, while Semiu “Jagaban” Olapade triumphed over Taiwo “Gentle Boy” Olowu.

The super flyweight division had the only female fight on the night and it ended in a draw between Kehinde Solomon and Happiness Okoh.