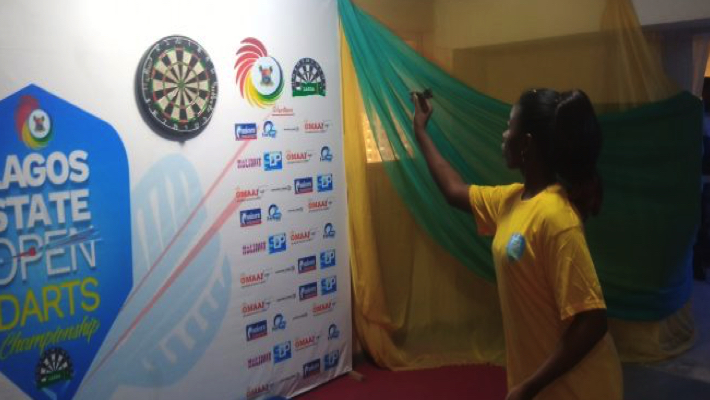 A 14-year-old darts sensation, Ayomide Ogunnowo, has set her eyes on competing at the World Darts Championship.

Ogunnowo had represented Lagos State Darts Association as an amateur player and won silver medal at the first Inspector-General of Police Darts Competition on Nov. 29.

The teenager, a Senior Secondary School II student of Covenant Child Academy, Ijesha, clinched gold medals at the junior and senior categories of the competition.

Darts is newly-introduced as a competitive sport.

Ogunnowo expressed her love for darts, newly-introduced as a competitive sport, noting that it had brought her fame.

She said that her passion would push her to participate at the world stage.

“I am happy with my progress in the game of darts, I started practising darts about two years ago.”

“I am happy that I am able to win two gold medals in different categories this year.”

“Darts involves rigorous practice so as to be precise enough for the target numbers on the board.”

“I started attending competitions when I felt I had gathered enough mental strength to compete with those that are older, even some as old as my father,” she said.

Ogunnowo told our correspondent that she had garnered much confidence and would wish to get a slot in the World Darts Championship.

“The dream of any athlete is to appear on the world stage, I want to represent Lagos at the biggest event of the game of darts.”

“I have seen many Nigerians at the peak of their careers in other sports, I want to be like them.”

“I thank God for the support from my parents and my coach, they have been wonderful,” she said.

“Ayomide Ogunnowo is a fantastic player, I am not in doubt of her ability to succeed in the game of darts.”

“Right from the time she was discovered until now, it has been a good show from her; she always takes her game to the next level.”

“Ogunnowo is playing well and I praise her courage because darts is a game of precision. With more coaching, she will be a great darter.”

“We are doing our best to groom her, I can see that she is not afraid to play against older players because of her confidence,” he said.

Mbappe, Lewandowski not in favour of biennial World Cup