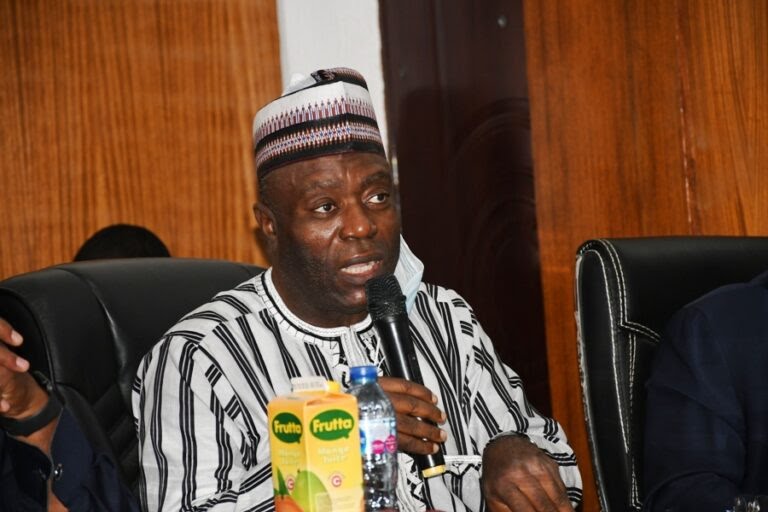 Workers in the Ministry of Defence on Tuesday, held a send off dinner in honour of the retiring Permanent Secretary, Mr Musa Istifanus, after 35 years of meritorious service to the nation.

Our correspondent reports that the Mr Istifanus who assumed duty as the ministry on Dec. 24, 2020, retired from active service on Dec. 31, 2021.

Our correspondent reports that some of his colleagues, friends and directors of the ministry took turn to eulogise the former permanent secretary who they described as diligent, disciplined and a professional public servant.

In his valedictory speech, Istifanus said that his greatest asset was his humility and friendly disposition towards his subordinates throughout his career in the civil service.

He said that every good leader must first and foremost be a good follower, adding that he learnt a lot from his subordinate members of staff which he said guided him in his conducts.

“If you want to be at the top, you must also be at the bottom and that is the principle I have used.”

“Every director here knows that I have a personal relationship with my staff and you must understand your subordinate to endear them to you,” he said.

The former permanent secretary commended the directors and staff of the ministry who supported him to deliver in his mandate.

He also thanked his wife for standing by and giving him support throughout his sojourn in the civil service.

Johnson said Istifanus came in with a lot of reforms that had transformed service delivery in the ministry of defence, adding that he respected and implemented civil service rules to the letter.

“His humility is second to none and his is a great mentor because we learnt a lot from him. He really took us through the rudiment of leadership,” he said.

Also, the Director of Army Affairs, Ministry of Defence, Mr Sunday Attah, described the former permanent secretary as a detribalised leader with a heart of service.

Attah said that Istifanus believed in doing the right thing for the system to thrive and the nation at large, adding that he had ensured that civil service rules were followed in all things.

“He came with public service rules and the moment you obey the rules you have solved all problems and you will treat everyone as equal.”

“We have had a good working relationship with him because he ensured that be brought out the best in you,” he said.